The Family of James George Price and Jane James

On 8 December 1845 a marriage took place between James Price, 23, bachelor, draper, otp (of this parish), father Thomas Price, farmer and Jane James, 21, spinster, otp, father John James, farmer, in Grosmont, Monmouthshire witnessed by John Broome and Wm James. Grosmont is near the Herefordshire border. In the Hereford Journal the marriage was briefly listed as being between Jane James and Mr Price of Llanvihangel Crucorney. James Price was not in Cwmyoy, Llanvihangel Crucorney or Grosmont in the 1841 census. In all subsequent censuses our James Price's birthplace was given as Cwmyoy, Monmouthshire. However, his age is generally reduced by one-two years, as is Jane's.

On the 27th September 1846 there was a Grosmont baptism for Mary Jane Price daughter of JG and Jane Price, otp, shopkeeper. The birth certificate shows that Mary Jane was born on 29 March 1846 to James Price and Jane Price (formerly James) with James a Grocer and Draper of Grosmont. Son John Walter Price was christened at Llangattock Lingoed on 10 October 1847, father James a farmer.

Anne Isabella Price was born to James (a weigher) and Jane Price of Tredegar Road, Rhymney on August 15 1852, was baptised September 25 and died March 3 1854.

In 1861 they had moved to Cloth Hall Row, Forchaman (Aberaman), Aberdare, Glamorgan. James was a coal miner and three more children had arrived: Thomas J. Price, 6, born Tredegar; Isabella S. Price, 3, born Aberdare; William H. Price, 1, born Aberdare. In the 1871 census they were at 71 Hill Street, Rhymney with James a grocer. Elvira Bridget Price was added to the family, aged 4, born Dowlais - a name that does not appear in any other context, but there are several named Elizabeth in the correct registration district. Isabel and William Henry have their birthplaces shown as Mountain Ash. No 71 was in the occupation of a William Thomas in 1874 when it was advertised as having a rental of £7 3s.

In 1872/73 the affairs of a James George Price, grocer of 57 Cardiff Road, Mountain Ash, parish of Llanwono, were liquidated. See London Gazette, October 25 1872 and London Gazette, January 24 1873. Was this our James Price? These premises were occupied by grocer Alexander Edwards in 1871. He went into voluntary liquidation with a first meeting of creditors listed in April 1872.

Jane Price died on February 16 1878, aged 54, in Back Street Brecknock (Brecon) of Carcinoma, wife of James George Price, Draper, the informant being Tom James Price who was present at the death. 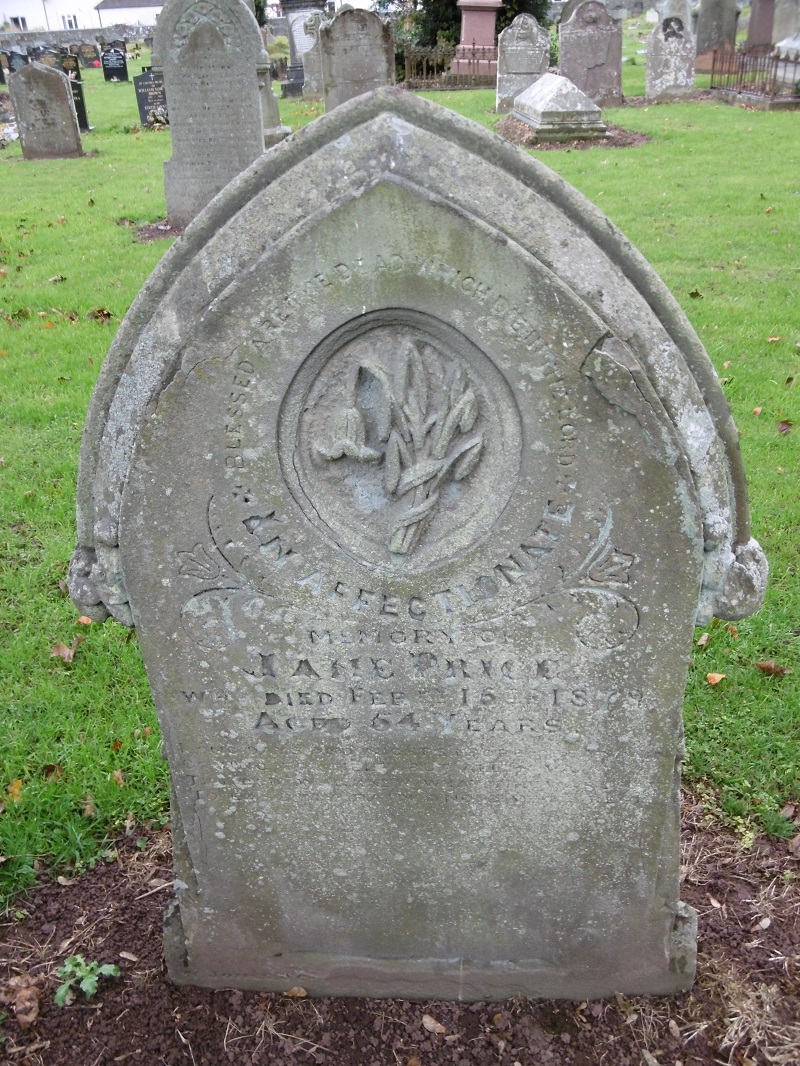 OBITUARY.- It is with deep regret that we have to record this week the death of Mr. Fred Morris, which occurred about 12.50 p.m., on Wednesday, after a very long and painful illness. Mr. Morris, who was well known in the town, was a brother of Mr. J. W. Morris, tailor and draper, Pontmorlais, and up to the time of his illness had been a pupil teacher under the Merthyr School Board, a most active and useful member of Hope Church, and also of the "Hope of Merthyr" Lodge of Good Templars He was well liked and much respected in the town, and had attracted around him a large circle ot friends, who held him in high esteem as a young man whose future promised to be useful and brilliant. Endowcd as he was with no ordinary talents, there can be no doubt that had he been spared he would have risen to a position of prominence and influence in his native town. He was only 21 years of age, and since his illness took a serious turn, which it did about two months ago, Mrs. Robottom, with whom he resided at 27, Victoria-street, nursed him as tender and assiduously as if he had been her own son. He was taken to London, where he was examined by tho eminent specialist, Dr. Frederick Roberts, who. however, gave no hope of his ultimate recovery. and in spite of the tender care and nursing and the best efforts of Dr. Biddle, who attended him locally, he succumbed as mentioned above. The funeral cortege, which will start from Victoria-street at 2.30 on Monday. will be public to gentlemen only, and the mortal remain will be interred at Cefn Cemetery. We sincerely join in the deep manifestations of sympathy shown toward: the bereaved family in their sore affliction. (Merthyr Times and Dowlais Times and Aberdare Echo, 19 September 1895)

FUNERAL Of MR. FRED MORRIS. - The funeral of Mr. Fred Morris, of Victoria-street, whose sad death was recorded last week, took place on Monday last at Cefn Cemetery. It was public for gentlemen only, but a large concourse of people came to pay their last respects. The Rev. Francis Jones, of Church-street, officiated both at Mr. Robottom's house, where the death occurred, and at the grave. The first carriage contained Mr. J. Morris (father), Mr. J. W. Morris, Mr. Rees Morris, and Mr. W. D. Morris (brothers); the second carriage, Messrs. Tom Price and Evan Morris (uncles), Mr. Robottom, and Mr. H. M Lloyd (chemist); the third carriage, Messrs. Thomas Robottom, Mr. W. J. Robottom, Mr. Lord, and the Rev. Francis Jones. The bearers were Messrs Jesse Taylor, W. T. Morgan, Edwin Davies, T. Bird. Charles Jones, and Tom Evans, whilst there were present the deacons of Hope Chapel, Mr. Fraser, Mr. Wilde, Mr. Tom Price, Mr. David, Mr. Joseph Williams, Tyst office, and a very large number cf young men. Th« family sent no wreaths, but one was permitted from the young people of Hope Chapel, with which the deceased had been so prominently connected. At the grave "Bydd Myrdd o Ryfeddodau" was rendered with thrilling effect. The undertaker was Mr. Edward Lumley, of Castle-street, who carried out the duties with every satisfaction. (Merthyr Times and Dowlais Times and Aberdare Echo, 26 September 1895)

J. W. MORRIS, Tailor, Hatter, and Hosier, 10, Pontmorlais, Merthyr, has much pleasure in informing you that he has just added a new department to his business, viz.. Ladies' Kid Gloves. The Stock is a completely new one, having been recently purchased from Messrs. Fownes Brothers, the celebrated Glove Manufacturers, whose reputation is a sufficient guarantee of the quality kept. Trusting to be favoured with your esteemed orders. (Merthyr Times and Dowlais Times and Aberdare Echo, 26 September 1895)

BUSINESS CHANGES - The premises at 39, Commercial-street, Aberdare until recently occupied by Mr. J. W. Morris hatter and hosier, have again been leased to him, and the shop will be re-opened in the course of a few days with a choice assortment of new goods. The business will be under the sole management of Mr. W. D. Morris.

Quiet Wedding
MORRIS-GRIFFITHS.
On Wednesday, December 29, at Tabernacle Cong. Church, an interesting wedding took place. The nuptial ceremony was performed by the Rev. J. Morgan Jones, M.A., Tabernacle, and the Rev. J. Lewis Jenkins, Trinity. The parties to the nuptial contract were Miss Ettie E. Griffiths, eldest daughter of Mr. and Mrs. Griffiths, Park School House, and Mr. W. D. Morris, 39, Commercial-street, Aberdare. The bride was given away by her father, while Mr. J. Aubrey Roberts, B.A., was best man. The bridesmaids were Misses Bronwen and Ira Griffiths, sisters of the bride. A reception was given at the bride's home, at which a number of friends attended. Mr and Mrs. Morris spend their honeymoon at Penzance. (Aberdare Leader January 8 1910)

William David Morris died in 1961. According to his son "My father was always known as Morris the Hatter, known by his colleagues as Bill Morris but by his family as Willie. I was born in Broniestyn Terrace in Trecynon and we lived there until after the 1926 strike when things got so bad we had to move to live over the shop." (see second article by David Walter Morris). They had:

In 1891 they were at 43 Brecon Road, Cyfarthfa, Merthyr Tydfil with daughters Mary J aged 19, Anne E aged 17 and Isabella, 7, all recorded as speaking Welsh only with the children born in Merthyr Tydfil.

She was a visitor in the household of William Reed, a butcher in Wolverhampton in 1891. His wife, Elizabeth had been born in Dowlais. In 1901 she was listed as Sarah Price a cook aged 41 in the household of Charles Griffiths in West Bromwich. By the 1911 census Isabel Sarah Price was shown as a 50-year-old Cook Domestic in the household of Frederick Mills in Birmingham. A death is recorded in June Quarter 1915: Price Isabel S 57 W. Bromwich 6b 990.

In the 1881 census, William Henry Price may have been a grocer's assistant to Elijah Singer at 10-11 Queen St, Cardiff (age and birth location match). In 1891 William H., 30, provisions merchant, was living at 58 Upham Park Road, Chiswick with wife Kate Harries (September 16 1884-January 27 1942) born Islington and two nephews: Albert Lynch, 5, born Cardiff, scholar and John W. Morris, 21, a Tailor's Cutter, born Merthyr Tydfil. By 1901 he and Kate, 34, had moved to 52 Napier Avenue, Southend, Essex where William Henry was 'Sup Provident Assistant London'. In 1911 they were at 126 High St Southend, when he described himself as a House, Land and Estate Agent. They had been married 24 years, with no children, Kate aged 46. A William Price of approximately the right age died in Romford District in Q1 1928 (needs checking).

She does not appear as 'Elvira Bridget' except in the 1871 census. This seems to have been a copying error at some stage in the census process. She was registered as Eliza Bridget Price by her mother. At Tom James Price's funeral in 1914, a newspaper obituary (see Tom James Price and Rosa Madia Thomas) names a sister as Mrs Leek. The 1911 census has Elizabeth Leek, born c.1867 in Dowlais living in Birmingham. Elizabeth married journeyman butcher William Leek (17 April 1861-3 April 1946, born West Bromwich, died Bromsgrove) at the Register Office in Cardiff District on May 11 1887. They both gave their address as 16 Henry Street Cardiff with fathers James Leek butcher and James George Price (deceased) grocer. The witnesses were Thomas Price and A. Price. In the 1911 census Elizabeth was at 51 Galton Road, Walton, Birmingham as head of household (but married) with 4 of her children while William Leek, pork butcher, was a patient at the Jaffray Hospital, Erdington. Elizabeth and William's children have significant family names: