The Family of William Gillett of Brailes, Warwickshire, England, UK

The Gilletts were a Quaker family from Upper Brailes, Warwickshire, originally sheep farmers who went into manufacturing (of Plush at Tusbrook Farm, Gillett's Lane) and banking.

Memories of Brailes by Alfred Woodward (1988) gives an account of the Gillett family:

'It is almost a century since the last Gillett lived at Brailes, but the Hill and Lane named after them ensures the Gillett's name will remain fresh in the minds of generations to come.'

Gilletts Hill is not, as commonly thought, the hill behind Tusbrook Farmhouse but part of Brailes Hill Farm. The current Gillett's Lane [older names are Leather Lane or Holly Walk] was named after William Gillett who worked in the first cottage as a woolcomber in about 1800 before moving to Tusbrook Farm in 1809. The original Gillett's Lane 'runs through the Poor Lands and on to the top of Brailes Hill, passing the field named Gillett's Hill on its left' (Woodward, 2006). In 1809 William Gillett was producing shag, hair shag, yarn, worsted, jersey, grey coating, and a rough coarse velvet. The plush weaving industry was booming. In 1790 there was fierce competition for oak timbers being removed from St Mary's Church, Banbury for conversion into home looms. By 1809 there were about 1000 weavers working in the Banbury area (Taylor, 1964). 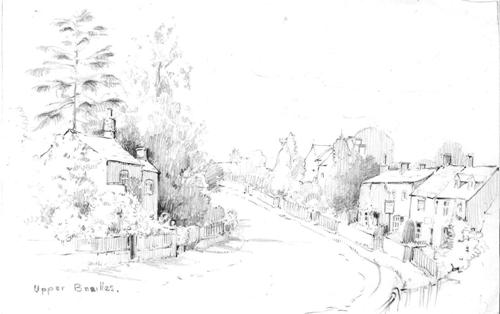 This information comes from a number of sources, including Burke's Landed Gentry.

Samuel's son, Thomas (a hosier) married Elizabeth and had children including: George (b.1838) and Catherine (b.1841). Samuel's son, Richard married Lydia Smith (1806-1857) in Reading in 1831 and had children including: Ann (b.1834) and Sarah (b.1836). Lydia was born in Witney to Thomas (a hatter) and Hannah Smith and was Thackwell Smith's aunt ( see below). Samuel's son, Edmund married Hannah Henshaw in Headington in 1842 and had a son John Henshaw Gillett in 1844. Edmund was a grocer/butcher and they lived in Sheep Street, Shipston-on-Stour.

William and Hannah had nine children, including:

F. William Gillett's son Edward (b.1803) married Ann Agnes Richardson (1808-1834) in Brentford, Middlesex in 1833 (although the registration county is given as Hertfordshire/Bedfordshire). Edward was described as a plush manufacturer, his abode as Christ Church, Surrey and his father as a Yeoman. Ann was the daughter of Thomas Richardson (a tinplate worker) and his wife Hannah. Ann died on 8th June 1834 and was buried in Long Lane. Her address was given as Nelson Square, Christ Church (Southwark).

G. William Gillett's daughter Sophia (1804-1843) married Joseph Fardon (1800-1877) in 1829 in Shipston-on-Stour (6 children, all died in infancy). Joseph was born in Reading and Sophia died there. Joseph then married Caroline Scuse (1796-1880) in September 1846. She was sister-in-law of John Gillett and maternal aunt of Eliza Walter and Marianna Smith. In 1871 Joseph and Caroline lived at 4, Columbia Place, Cheltenham, Gloucestershire (now 112-122 Winchcombe Street). Joseph was described as a retired Druggist. Staying with them was Mary Fardon (1808-1890) his sister-in-law who died in Reading. When Caroline died her trustees were Marianna's husband Thackwell Smith and Charles Gillett, her husband's nephew by his first wife.