The family of Samuel Jones and Sarah Rees of Llanelli, Ebbw Vale and Glanaman 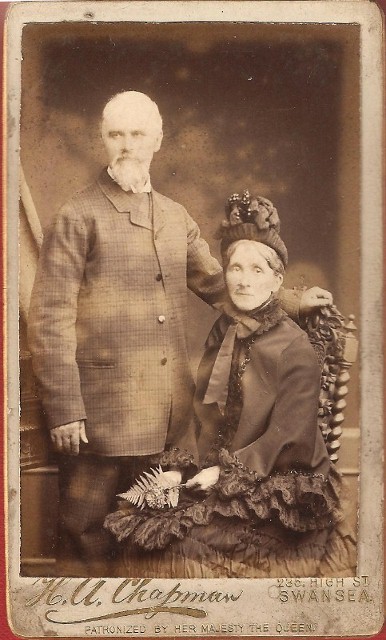 Notes from a conversation with her granddaughters in the late 1960s record that Sarah Rees came from Victoria, Ebbw Vale, Monmouthshire and had Bevan ancestry. The granddaughters believed that Sarah's father (but not her mother) had emigrated with a group to the USA and that explained the relative lack of knowledge about the family. Sarah's birth certificate records that she was born at the Victoria Iron Works, Bedwellty parish on March 11 1842. Her father was Rees Rees and mother Margaret Rees, formerly Bevan.

See Rees Rees of South Wales, Illinois and Iowa for detailed information on his ancestors and descendants.

Llanelli-born Samuel Jones (1842-1917) appears to be the son of John Jones and Mary James. The most likely marriage for Sarah and Samuel Jones took place at Zoar Baptist Chapel, Ystalyfera on August 13 1870 when her father was given as Rees Rees.

In the 1881 census Samuel and Sarah were recorded at 'Pantyffynon', in the parish of Bettws, Carmarthenshire. The names of the adjacent properties indicate that this was in the Glanaman area, not the more familiar Pantyffynon near Ammanford. Samuel was shown as a 38-year-old Rail Engine driver, born Llanelly with wife Sara (39), and children Jonathon R. (12), Margaret (9), Mary (7) (all born Ebbw Vale) and Thomas (3) and Meredith (2) (born Carmarthenshire Bettws).

In 1891 they had moved to a nearby property, Penwaun, where Samuel is recorded as a stationary engine driver. Sons Thomas and Meredith are coal miners. Margaret J. was then married to James Thomas (21) also a coal miner, both living at Penwaun (see Thomas Family of Banwen farm, Glanaman). Jonathon was recorded as a Railway Foreman lodging in the house of Henry and Annie Morgan at Gurnos, Ystradgynlais with mother Sarah a visitor. Mary (Polly) was recorded with Sarah's sister Jane Lewis in Penmaen, Monmouthshire. 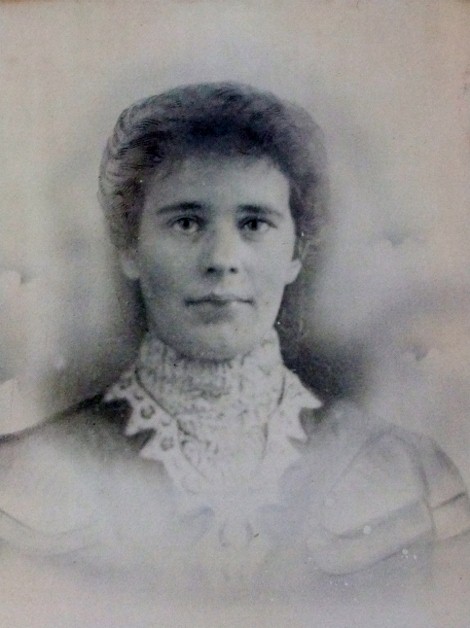 By 1901 they had moved again to Grenig Cottages when Samuel remained an engine driver. Margaret Jane had died of tuberculosis on 4 January 1896 and one of her daughters Elizabeth Ann Thomas (8) was living with them along with Polly (Mary) and Thomas (Tommy). They had a new house 'Brooklands' built on Cwmamman Road (now 128). Polly died of TB on 9 March 1906. Neither Polly or Thomas married - he died in 1956.

The following inscription was recorded on a gravestone at Hen Bethel, Cwmaman in the 1960s: 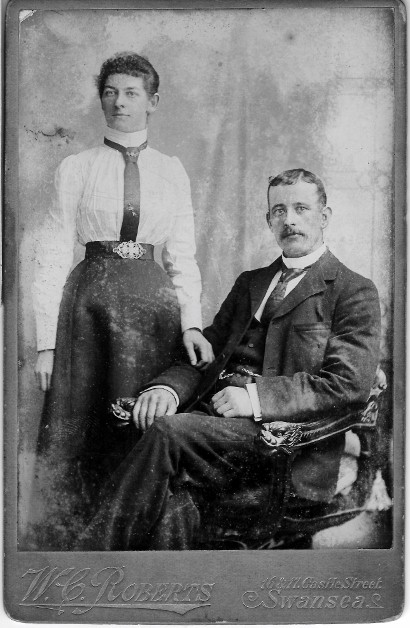 In the 1911 census Olive was at 39 Delhi Street, St Thomas, Swansea described as married for 9 years, 4 children with 3 still alive. John Hanlon, widower aged 59 having been married 32 years with one living child was a boarder, dock labourer born Manchester. With them were Olive Myra Jones aged 5 and Maud Evans 28, a cousin. Samuel John and Meredith Jones were with Olive's sister Elizabeth Jane Morgan (1878-1962), her railway shunter husband George Spiers (1873- ) and the boys' grandmother Mary Jane Morris - probably Mary Jane Kelly/Morgan - in Port Talbot in the 1911 census. Subsequently, Sammy was brought up by his other grandmother Sarah Jones in Glanaman. According to family information Olive Myra Jones became a nurse in Fulham. In the 1939 Register she was a sister at the Pinewood LCC Sanatorium in Wokingham. An Olive Myra Jones, born November 8 1906, of Flat 10, Point Royal, Easthampstead, Bracknell, Berks died on 24 June 1969. 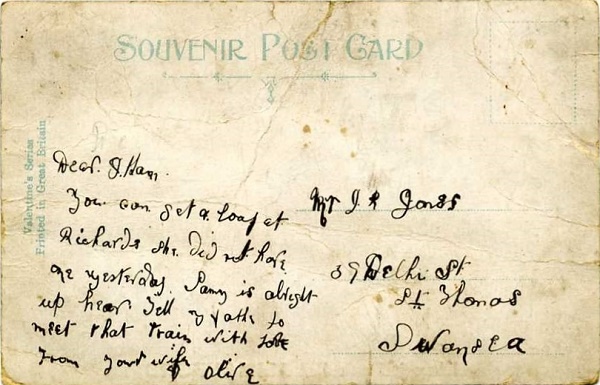 Weekly Mail September 7 1907 - LOCAL WEDDINGS. JONES-THOMAS. The village of Pensarn, near Carmarthen, was gay with flags and bunting in celebration of the first wedding solemnised at Babell Calvinistic Methodist Chapel, which has recently been restored. The contracting parties were Miss Margaret Thomas, only daughter of the late Mr. John Thomas, of Pensarn, and Mr. Meredith Jones, son of Mr. Samuel Jones, Glanamman.

Meredith, A GWR engine driver, married Margaretta Thomas (Geta) (1885-1937) in Carmarthen and had at least one child, John Samuel Jones (Jack) (1909-1991) (b.24th February 1909) who became a policeman and lived at 106 Trinity Road, Aston, Birmingham. Meredith's retirement is mentioned in the Amman Valley Chronicle of May 18 1939 where he is described as a 'royal train driver' having commenced as an engine cleaner in the Garnant shed in 1894 and retired from the Carmarthen shed after 45 years service. He drove the Royal Train to Pencader in summer 1937. (source: www.tytwp.plus.com). Meredith's probate gives his address as 16 Mansel-street, Carmarthen and date of death as October 10 1942. Probate was granted to John Samuel Jones and Leah Margaretta Davies (wife of David Oswald Henry Davies, 1908-1980). Effects £1076 2s 3d. Leah appears to have been a niece (Margaretta Thomas) living with Meredith in the 1911 census and the 1939 Register.