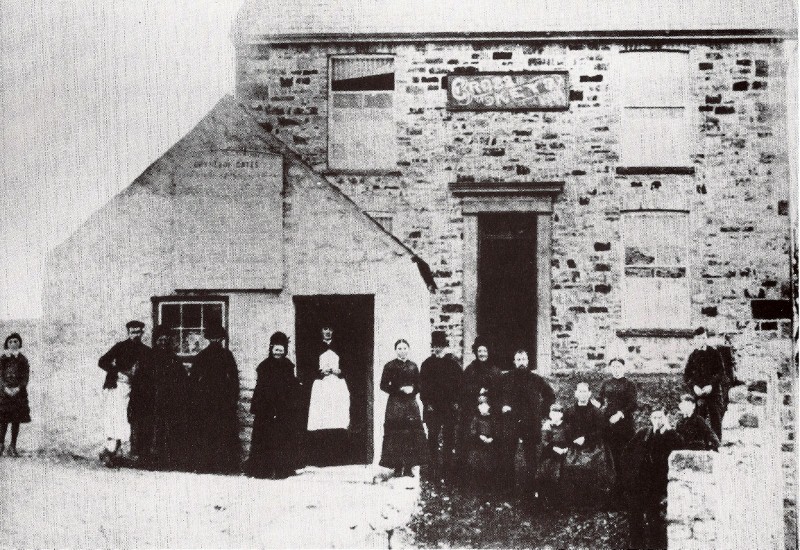 The photo dates from the 1880s (probably 1885-1886, based on the ages of the children and the fact that Hannah Thomas, one of the people shown, married in 1887) and 'Danie' Thomas, Gelliceidrym, and his wife 'Nansen' - with 'Stovepipe' hat and bonnet, respectively - are Daniel Jones and Ann Rees with friends and family outside the Brynlloi tollhouse and Cross Keys, Glanaman. The photo was featured some 30 years later in the Herald of Wales March 28 1914:

CWMAMMAN IN THE GOOD OLD DAYS. This a picture of a portion of old Cwmamman together with several of its best known inhabitants at the time it was taken. In front of Brynlloi Toll-house is the tab!e of rates, and Miss Thomas, the collector, is seen at the door. All those who appear in the picture were a peaceful and law-abiding lot, but stormy scenes were witnessed on this very spot when Rebecca and her daughters marched through South Wales demolishing all toll-gates and demanding the abolition of tolls. At the door of the toll-house stands Miss Thomas (now Mrs. David Llewelyn, Bryngwyn House), on her right Mrs. Morgans, Brynlloi, better known to the present generation as Mrs. Daniels. Next to Mrs. Daniels is Ann Griffiths, Shop Fach, and her mother, Mrs. Mary Griffiths; then Edwin Griffiths, Factri, and with him his youngest sister Miriam (now Mrs. J. Rees. Llanelly). To the left of Mrs. Llewelyn is Miss Hannah Thomas Banwen; then old Danie Thomas, Gelliceidrym, and his wife Nansen. On the Cross Keys door is the late Mr. David Jones, landlord, and sitting by his side is Mrs. Jones, with her daughters - Mrs. W. Roberts, Mrs. Dd Rees, and Mrs. J. Leonard. The lads near the wall are Messrs. John, Hugh and James Jones.

A record of a wedding between Daniel Jones and Ann Rees exists for August 8 1835 at Llanguick (Llan-giwg) parish church. Although this was a long-time nonconformist family (Welsh Independent Congregationalist - Annibynwyr) marriages before 1837 had to be conducted in a parish church. Ann Rees may have been baptised on 11 June 1813 as the daughter of Richard Rees a collier of Cilmangwin (Cilmaengwyn) and Anne. However, Richard is a name not used subsequently in the family, which makes this a doubtful supposition. Another possibility is that Ann was the daughter of Hugh Rees (c.1761-1849) and his wife Anne Griffith who married at the parish church on 4 April 1812 and were at Nantygaseg, Llanguick in the 1841 census and previously there in 1824 when a Catherine Rees was baptised by independent minister of Pant-Teg, Alltwen and Carmel.

The Pant-Teg nonconformist baptism records show a Mary Jones - daughter of Daniel Jones Gellilwcafach, labourer in the parish of Llanguick and his wife Ann - born June 9 1836 and baptised June 16 1836 by Phillip Griffiths independent minister of Pant-Teg, Alltwen and Carmel. Gelli-Lwca-Fach is close to Saron Chapel, Rhydyfro.

In the 1841 census Daniel and Anne were living at Kilypentan (Cil-y-Pentan, or Cilpentan) farm, Llanguick parish, Glamorgan. This property is now Cilpentan, Llwyncelyn Road, Tairgwaith, Gwaun-Cae-Gurwen. Daniel is shown as a farmer aged 30 and Ann as 25. (Adult ages were rounded down to the nearest five in that census). Their children were Mary aged 5, David Jones aged 2 and Hugh Jones aged 1. All were born in Glamorgan.

LLANDILO PETTY SESSIONS - (...) Mr. James Harper Dudley, officer of Inland Revenue, charged Daniel Jones, of Gelly- ceidrim, Bettws, with smuggling malt. Defendant pleaded guilty, and was fined in the mitigated penalty of £25, but recommended to be reduced to £10. (Welshman 27 April 1855)

In 1871 Daniel and Ann were still at Gelly Ceidrim. He was described as a farmer of 57 acres. With them was grandson David Williams aged 9, born Carmarthen Bettws. By 1881 Daniel (73) and Anne (67) had retired to Prospect Place listed on the census between the Half Moon Public House and an Independent Chapel.

Daniel Jones (78) died March 16 1888 (Llandilofawr Vol 11a page 595) at Prospect Place, Cwmamman. His death was registered by his son David Jones of the Cross Keys Inn. In 1891 Anne Jones (78) widow was listed as a retired farmer at Gate House in Glanaman with a lodger Rachel Morriss (25) a tin worker born Morriston. In 1901 Anne Jones (88) was living on her own means in the Toll House next to the Cross Keys Inn in Glanaman. One can assume that Gate House and Toll House were the same. She died August 10 1903.

Notes of a discussion with Sarah Phillips and Elizabeth Ann Jones, their great-granddaughters, on 2 September 1968

Daniel Jones was known as Daniel 'Clip' because one eye was covered by a patch. They thought he had been born in Cilpentan, GCG but this seems to refer to their grandmother Elizabeth Jones. They eventually moved to a farm in Glanaman. Daniel Thomas (their father's brother) had a photograph of them - probably passed on to other relatives - that Sarah remembered. Daniel Clip was standing wearing a stove-pipe hat and frock-coat with Anne sitting with lace bonnet.

Sarah also remembered an incident related by her father. Daniel, who apparently liked his beer and frequently returned home from the Cross Keys on a pony - more often on its own memory than any guidance from Daniel. On one occasion he gave someone a lift on the back of the pony and galloped up the slope to find, on reaching the Half Moon, that she was no longer behind him!

Anne was known as 'Mamgu Gât' to her family because she lived for a time in the Toll Gate House near the Cross Keys Inn. She lived there after Daniel's death and then, when she became infirm, moved in with 'Mamgu Betty' (her daughter Elizabeth). Sarah remembered taking care of her on one occasion when Betty had gone out. She had been on strict orders not to allow Anne out of the bed - which was in the kitchen, However, she was bribed with a sixpence. Some time later (days...weeks) Anne tripped over a ladder in the garden and the shock of the fall hastened her death.

An application from David Jones, Cross Keys, Cwmamman, which was partly considered at last meeting, was the first subject that gave rise to much consideration. Mr Jones, it appears, has built an addition to his house, and the outlook from the windows of the new building is directly interrupted by the Brynlloi toll house. Mr Jones offers to give a nice piece of land as the site of a new and larger toll house just across the road at the other side of the gate, but that would involve expense, and the present house appears to be sufficient for its purpose. All things considered, the County Roads Board on this occasion resolved that the clerk should write to Mr David Jones informing him that, as at present advised, they could not entertain his proposal.

CWMAMMAN. GALLANTRY OF MINERS -On Wednesday the Royal Humane Society awarded silver medals to Aaron Williams and David Jones, colliers, for saving the life of Thomas Roberta, at Dynevor, or Glanamman, Colliery Carmarthenshire, on January 6tn. Roberts and another were ascending the shaft when the winding gear became unmanageable. On reaching the surface Roberts jumped out, but fell back again to the buttom of the pit, into 40 feet of water. The other man was killed. Williams and Jones went down a rope of doubtful strength, found Roberts, fastened him with a rope, and all were hauled safely to the surface. The adventure was regarded as a very dangerous one by the committee of the society.

GLANAMMAN. FUNERAL OF MR DAVID JONES, CAWDOR COLLIERY. - On Saturday afternoon last, the mortal remains of Mr David Jones, Cross Keys Cottage, were conveyed to their last resting-place at the graveyard adjoining Tabernacle Methodist Chapel, of which chapel deceased was a member. The afternoon was particularly fine, and nature was clothed in all the glories of a spring day. This, confined with the esteem in which deceased was held, drew forth a great concourse of people, so that the funeral cortege was about the largest ever seen in the valley. The Revs J Oliver and J Towyn Jones officiated at the funeral. (...)

GLANAMMAN - DEATH OF A WKLL-KNOWVN COLLIERY PROPRIETOR.- We regret to announce the death of Mr David Jones, the head of the Colliery Company, Messrs D Jones and Sons, Cawdor Colliery, Garnant, which took place at his residence, Cross Keys Cottage, Glanamman, late on Tuesday evening of last week, at the age of 64. He had beeu in indifferent health for some time past, but was able to attend to buainess as up to the previous Friday, when he visited the Colliery office at Swansea as usual. He was there taken suddenly ill, and, returning to Glanamman, he was immediately attended to by Drs Rees and Rowlands, and on Saturday the services of Dr Griffiths, Swansea, were requisitioned, but in spite of all medical care he gradually sank, and quietly passed away, the immediate cause of death being an acute attack of congestion of the lungs. Mr Jones, throughout his life had been closely associated with colliery enterprise, and was one of the most repected and well-known inhabitants of the Amman Valley. He is survived by his widow and eight children - five sons and three daughters - and an aged mother. The funeral took place on Saturday, the interment taking place at the churchyard adjoining Tabernacle Chapel, of which deceased was a member.

DEATH OF AN OLD INHABITANT.-We regret to announce the death of Mrs. Mary Jones, Cross Keys, at the age of 76 years. The deceased lady was well known as one of the old natives, and highly respected. She leaves four sons and three daughters to mourn their loss. The funeral took place on Tuesday at Tabernacle, and was largely attended. Mr. Oliver and the minister officiated.

At the Cross Keys with sister Mary Williams and her husband in 1861 as an unmarried coal miner. In 1871 he was in Fforest Fach, Swansea with wife Jane ? (28), son Daniel Jones, (6 months) both born Swansea and boarder Thomas Davies (20) born Carmarthenshire.

Hugh appears to vanish from later censuses, however the explanation may be found in the following item from the Cardiff Times June 5 1872 (Swansea section):

INQUEST. - An inquest was held on the 31st ult., before the deputy-coroner, Mr. Gaskoin, at the Star public-house, Forest Fach, touching the death of a collier named Hugh Jones, aged 32 years, employed at the Cwmbwla colliery. Deceased, contrary to the rules, on the 30th, descended the slant in a tram, the chain of which broke, causing deceased to receive such injuries that he died the following day. A verdict was returned in accordance with the evidence adduced.

By 1881 they had moved to the family farm on the mountainside. More at The Thomas Family of Banwen farm, Glanaman for further information.

They were at Cwmgrenig farm in 1939 with Grenigwen and John. Jenny resided at Maesannan, Llwyncelyn Road when she died in 1945, administration given to William Rees, retired farmer. William died at the same address in 1949, administration to John Rees, Bank Clerk.

David Williams was educated at Brecon Memorial College and ordained as minister of the Ffaldybrenin and Esgerdawe Congregational Churches in August 1913 and remained there until 1928: He married Rachel Mary Jones (August 6 1894-February 1940). In 1939, he was a retired Congregational Minister living at Wenllys, Lampeter, Cardiganshire.

BRYN SEION.-The Rev. David Williams, B.A., late Gelliceidrym, officiated on Sunday last. As usual Mr. Williams was interesting and sweet. By all accounts his pastorate at Ffaldybrenin is highly successful.