In the 1861 census John Jones is described as a thatcher aged 62, born Clyde, Pembrokeshire with wife Mary (64) born Kilrhedin, Carmarthenshire. Daughter Hannah (25) was also shown as born in Clyde. A grandson (to John Jones) Evan (4) born in Llanelli has appeared. In the 1871 census Evan John (1856-1931) is shown as Hannah's son.

Hannah married William D. John (1841-1915) in 1865 and had Mary Jane John (c.1866- ), David E. John (1872- ) and Rees John (1875-1919) in Maesteg, Glamorgan. Tracing the family further is complicated by the varying ages provided on censuses. For whatever reason, Hannah massaged her true age and had lost 7-8 years by the 1871 census when she was shown as 31, compared with William's 30. They were living at 9 Arosfa Road, Cwmdu, Llangynwyd in Bridgend district. He was a casting dresser at an ironworks; both were shown as being born in Penrhyn, Pembrokeshire and son Evan was 'tending rivets to a boilermaker'. In the 1881 Welsh census Evan was no longer with them and millwright William was shown as aged 37.

Evan reappears in later censuses as Evan John Jones with a somewhat variable birth year but he remained in the Maesteg area as a colliery blacksmith, and married Mary Jane Howells (born c. 1857 in Pontypridd) and had one child, Edith Maria Jane Jones (1887-1953). Edith married Illtid John Lewis (1884-1914) who kept the Queens Hotel in Maesteg. He died in Porthcawl on September 26 1914 and buried in Llangynwyd two days later. They had May Lewis (c.1909- ). Edith died on January 31 1953 at Laurel Cottage, Nantyffyllon, Glamorgan - probate to John Henry Davies, insurance agent and Brinley Richards, solicitor, effects £1000 7s 9d.

Glamorgan Gazette July 31 1908 - PRETTY MAESTEG WEDDING. The marriage of Mr. Illtyd J. Lewis, of the Queen's Hotel, Castle-Street, and Miss Edith Jones, daughter of Mr. and Mrs. E. Jones, Laurel House, Nantyffyllon, which took place at Llangynwyd on the 21st inst., was an event in which much interest was taken throughout the district. There was a large attendance of well wishers in the old Parish Church, which was nicely decorated for the occasion. The bride, who was given away by her father, was charmingly attired in a gown of cream silk crepe-de-chine, over silk, trimmed with silk brocaded applique and orange blossom. worked in horse shoe shape on trail of skirt. She also wore a large picture hat of cream silk spotted net, trimmed with large white feathers and long ends of cream silk ribbon. and carried a bouquet of white flowers. Mrs. Eynon. Mountain Ash. sister of the bridegroom, who accompanied the bride was dressed in cream silk poplin-de-chine, trimmed with silk braided lace insertion and chiffon, and wore a cerise hat with large feather and sprays of loses to match. The bridesmaids were Miss Mabel Treharne, Tycoch. Coity, and Miss Blodwen Jones, Station- street, Maesteg. who were dressed in white silk. trimmed with silk lace, and hats to match, and carried cream Common Prayer Books, the gifts of the bride. Mr. John Evans, of Morriston. cousin of the bridegroom, acted as best man. The ceremony was conduoted by the Rev. John Jones, vicar. After the ceremony the wedding breakfast was partaken of at the Dunraven Hotel, Bridgend, the guests, numbering 32, driving in closed carriages from Llangynwyd. The large bride cake was handsomely decorated with silver bells and ornamental figures. The health of the bride and bridegroom was given by the Vicar. The happv couple left Bridgend by the 4.23 p.m. train for London, where the honeymoon is being spent.

According to the US 1900 census Hannah was born in 1842 and had 6 children, 4 of whom were living. Hannah, David, Mary J and Rees arrived in New York from Liverpool on the Guion Line's ss Arizona, on August 14 1882 (William seems to have travelled separately). The Arizona was a relatively new ship, built at Govan on the Scottish Clyde in 1879, that competed for the fastest 7-10 day Atlantic crossings - at the expense of comfort - and carried around 1000 steerage passengers and a few hundred in more privileged cabins. Oscar Wilde had been one of the earliest (non-steerage) passengers that year. The Arizona had received much publicity, e.g. 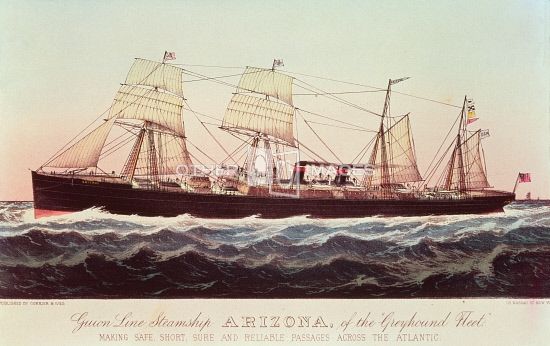 The improvements which are constantly being made in the building of steamships, enabling them to travel more swiftly, lead to the communication of facts of great interest-to the public, showing the speed with which a steamer can now cross the Atlantic. It seems that the Guion liner Arizona has made the passage out in. seven days, eight hours, and twelve minutes, and the voyage home in seven days, seven hours, and forty-three minutes. The homeward passage was thus effected in half an hour less than the outward still the latter is the more remarkable performance of the two. The prevailing winds which blow over the Atlantic are from west to east; the course of the Gulf Stream is in the same direction, and it is obvious that the combined influence of both must be of material assistance to a ship on its way from New York to Liverpool. (Aberdare Times, 18 February 1882)

They would have responded to an advert such as the following (from the Western Mail 29 April 1882):

They travelled to Scranton, a major destination for skilled workers from South Wales.

Hannah died on Thursday 11 July 1912 leaving an estate of $4000. According to her Will she left the plot of land on North Rebecca Avenue, Scranton, conveyed to her by Payne Pettibone et al on June 22 1885 (Lackawanna Deed Book 32, page 176), on which two dwelling houses numbers 320 and 322 were situated, to her husband William D John. After him no. 320 would go to Rees John provided he paid David John $200 within 2 years, and then if without issue to Mary Jane Hopkins and her descendants. No. 322 would go Mary Jane Hopkins, provided she paid $200 to Hannah's son Evan Jones of Maesteg, South Wales, and then to Mary Jane's descendants. The following letter was sent from the USA in 1912 to Hannah's brother Samuel Jones in 1912: 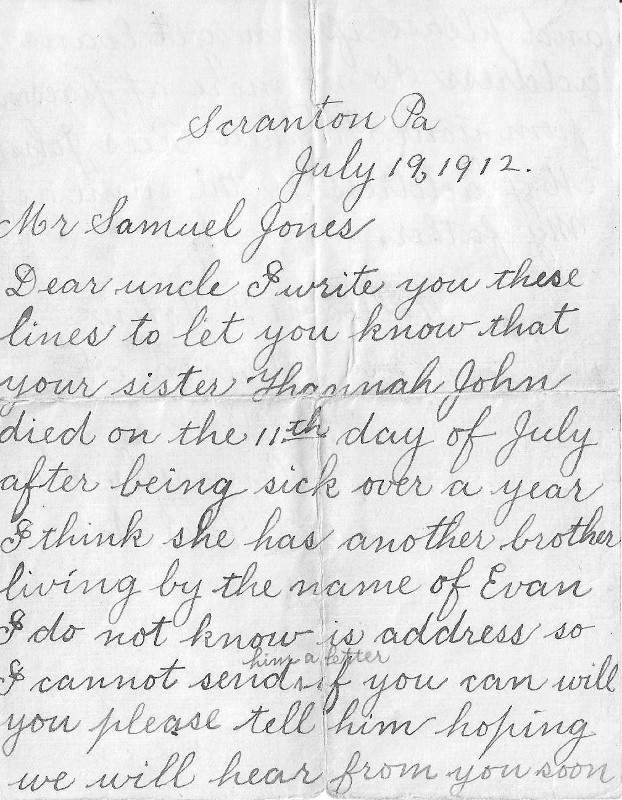 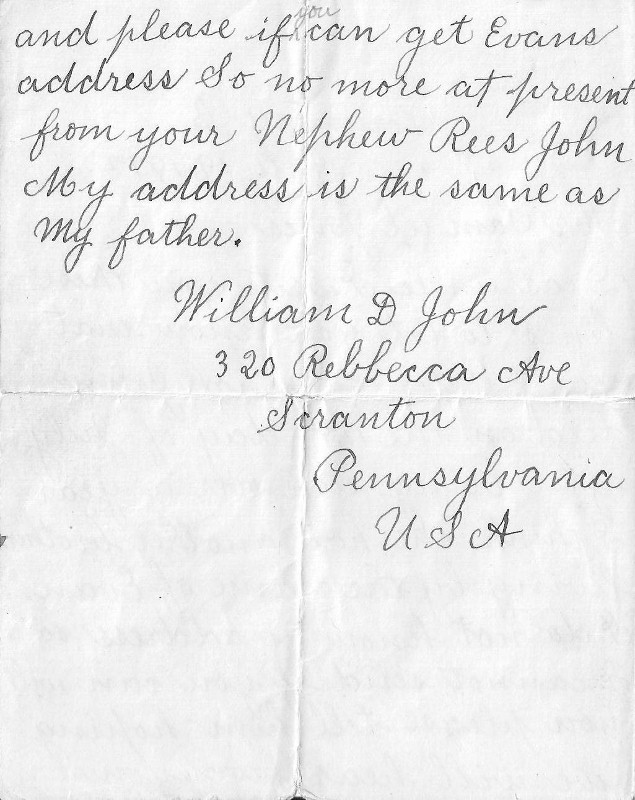 Scranton Pa July 19, 1912. Mr Samuel Jones, Dear uncle I write you these lines to let you know that your sister Hannah John died on the 11th day of July after being sick over a year. I think she has another brother living by the name of Evan. I do not know is address so I cannot send him a letter if you can will you please tell him. Hoping we will hear from you soon and please if I can get Evan's address. So no more at present from your nephew Rees John. My address is the same as my father William D. John, 320 Rebbecca Ave, Scranton, Pennsylvania, USA

William D John died in 1915. His Will aroused some interest in the local press. Scranton Republican December 30 1915:

PECULIAR BEQUEST IN THE JOHN'S WILL Unless his granddaughter, Mrs. Mary Hopkins James, of this city, obtains a divorce from her husband she is to receive $1 a week from the estate of her grandfather, the late William D. John, of 320 Rebecca avenue, for the next four hundred weeks, according to the terms of Mr. John's will, filed yesterday in the office of Register of Wills Thomas Beynon. In the event that Mrs. James gets a divorce she is to receive her bequest of $400 immediately. The will was executed in June, 1914, but records in the court house fail to show that the woman has secured a divorce. An estate of $1,600 is left by Mr. John. Each of his grandchildren, Edith Matthews, Jennie Hopkins and Bertha Hopkins are to receive $50 each. Another grandchild, Margaret John, gets $100 and his, son, Rees John, is left $200. The residue of the estate goes to his daughter, Mary Jane Hopkins Hughes and sons, Rees and David John.

The following appeared in the Scranton Republican Saturday, November 29 1902:

The funeral of the late Hopkin Hopkins, the miner who died at his home on North Rebecca avenue Tuesday evening from injuries received from a fall of roof while at work in the Capouse colliery of the Scranton Coal company, was held from his late Home yesterday afternoon and was largely attended by acquaintances and friends who had known and respected him while in life. There were a number of beautiful floral tributes from relatives and friends, mute testimonials of the respect and esteem in which he was held. Rev. D. D. Hopkins, of the First Welsh Baptist church, preached the funeral sermon. The Capouse Accidental fund, of which the deceased was a prominent member, and Enterprise lodge, Loyal Knights of America, were in attendance. The pallbearers were from the latter organization. Farewell view was taken of the well-known features and the cortege slowly moved to Cambria cemetery, where Interment was made.

In the 1910 census the Matthews were at 320 Rebecca Avenue and widowed Mary Jane and her other daughters were at 322. A note in the Scranton Republican January 14 1914 recorded that "Mrs Edith Matthews underwent an operation at Emergency Hospital yesterday". In his draft registration in 1915, Thomas Matthews gave his address as 303 Filmore. In 1920 Mary Jane had become Mary Jane Hughes but was again widowed. Jennie was a photographer, Bertha a bookkeeper. To confuse matters, Mary Jane described herself and her parents as being born in England. The 1940 census shows that 320 Rebecca Avenue was owned by Thomas (a bakery salesman) and Edith Matthews. At that time they shared the house with Ethel and her husband Charles Watkins (1909-1974), a PBX installer for a telephone company, with their children Margaret Watkins, Charles Watkins, jr, and Arthur Watkins.

Mary Jane went on to marry David Hughes (c.1857- ) on March 12 1913 and lived until 4 September 1956, buried Scranton. This was David Hughes' third marriage having previously been married to a Catherine Jarrett and a Mary Davis.

Rees John's World War 1 Draft Registration of September 1918 shows him still at 320 Rebecca Ave. He is described as a laborer born England (sic), date of birth May 5 1874, of medium height, blue eyes and red/grey hair. His next of kin is given as David John, 15 Northrup, Norwich, NY. Rees died on Monday, 28 April 1919. In his Will dated October 31 1918, witnessed by W, Gaylord Thomas (an attorney) and Jennie Hopkins, Rees left one-third of his estate (worth a total of $1906.09) to his brother David John of Norwich, New York, one-third to his sister Mary Jane Hughes of Scranton, Pennsylvania, and one third to his half-brother Evan Jones of Maesteg, Wales, Great Britain. Sister Mary Jane Hughes and niece Edith Matthews were executors.

Hannah, William D and Rees are in the Washburn Street Cemetery records (typed in 1946) also known as Hyde Park or Welsh Cemetery.


To contribute, query or comments please contact us through editor@hrmguide.net