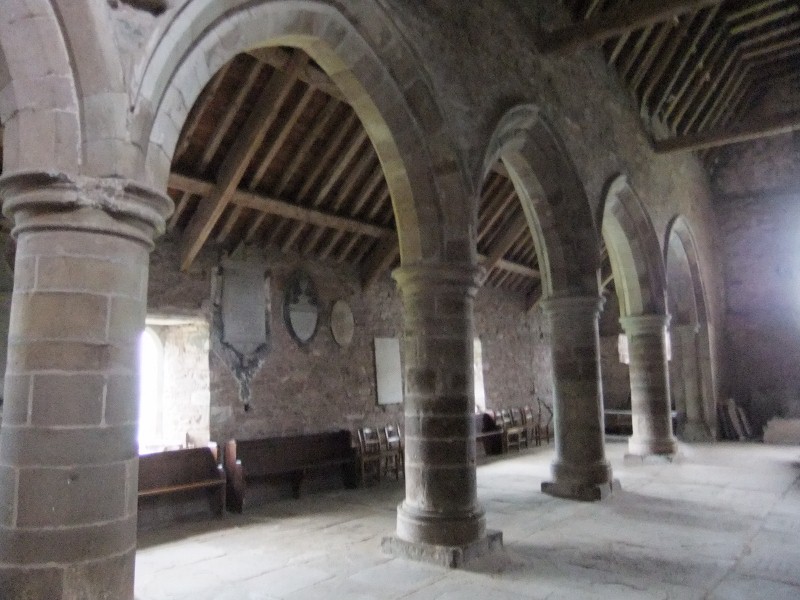 The James family of Grosmont, Monmouthshire, Wales date back to the 17th century (at least). Grosmont is near the Herefordshire border and was Welsh-speaking until the end of the 18th century, according to Bradney. There was a transition from the old Welsh patronymic system to the use of fixed surnames in the 16th and 17th centuries and there are gaps in the parish records in the 17th century. This makes it difficult to identify family relationships in that period. Solicitors' records (see notes) refer to a Philip James and a William James having lands in Grosmont in 1688 and a Thomas James having tenancy of a house in 1714.

A mason named Henry James (Harry or Hendrey) (c.1679- buried 10 October 1752) married Ann Cox of Rolston (Rowlstone, Herefordshire) (c.1679- probably buried 10 October 1764) at Grosmont on June 20 1699. The birth years are notional. There is a Roman Catholic register entry for this marriage. Ann passed the administration of Harry's estate in 1753 to her sons William and John, both masons. Henry and Ann's children (baptised in the parish church and as Roman Catholic) included:

Walter James (parish clerk of Grosmont) and brothers John James (farmer), Thomas James (farmer), and the children of William James (deceased) and sister Mrs Mary Dyke are named as beneficiaries in the will of Elizabeth James (spinster) of Kingsfield who died in 1835. Elizabeth James had inherited the estate of Walter James (d. 1821) whose brother John James had predeceased him. Elizabeth was described as 'our relative residing with us' at Kingsfield in Walter's will. Her dates coincide with a baptism on December 18 1758 for Elizabeth daughter of Richard James. John and Walter were the sons and executors of John James (1700-1772). Elizabeth's death notice in the Hereford Journal of 5 August 1835:

On Monday the 27th ult. died, at Kingsfield, near Grosmont, Monmouthshire, Mrs James in the 70th year of her age; she was universally respected by her numerous friends, and her loss will be long felt by the neighbouring poor, to whom she was always a kind and steady friend.

While the Monmouthshire Merlin of 1 August 1835 more accurately stated:

Qn Monday last, at Kingsfield, in the parish of Grosmont, in the 77th year of her age, Mrs. Elizabeth James most sincerely regretted by the whole neighbourhood, more than 200 of whom, to testify their respect for the deceased, followed her remains to the grave.

DEATHS - Qn Monday last, at Kingsfield, in the parish of Grosmont, after a protracted illness which she bore with Christian fortitude and resignation, Mrs. Elizabeth James, in the 78th year of her age. She lived respected by the rich, to whom she was always courteous, affable and obliging; beloved by the poor, to whom she was a constant, judicious and liberal benefactress and her death will long be a subject of deep regret to all her relatives, friends and neighbours. 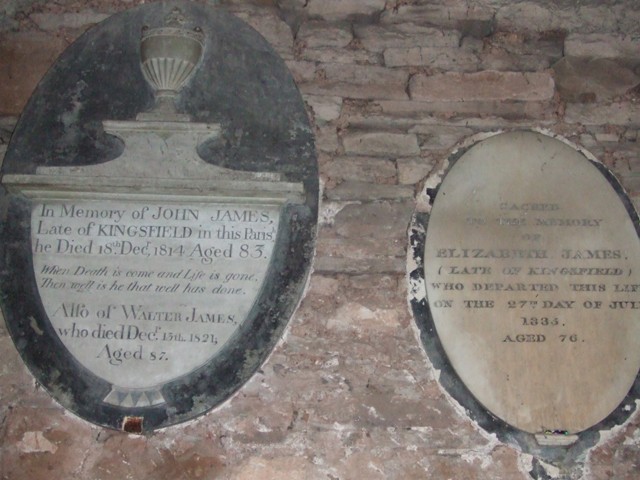 There is a Grosmont baptism record dated 19 September 1825 for a Jane James (1825- ) daughter of John and Jane James, otp, farmer who married James Price in 1845. Other baptisms for a couple of the same name include:

These names and ages correspond with a family listed at Mansion, Grosmont in 1841 without mother Jane (buried 4 February 1839, aged 48), daughters Mary (buried 30 September 1837, aged 16), Sabina (buried 9 December 1837, aged 9) and Louisa (buried 16 January 1841) but including a Walter James with a rounded age of 65, 'Independent' (John's brother). Walter was buried on 10 March 1854, aged 79, opt, Coroner's Order. In his will, his estate was left in trust to John James and subsequently to Sarah and Isabella Abigail. Ann James appears in the 1851 census but not in Walter's will, suggesting that she had died by 1854. Jane Price received a hundred pounds (after her father's death) for her own - not her husband's - use. Isabella Abigail Nicholas was brought back to Grosmont from Broad St, Hereford for burial 20th October 1864 aged 32 having married Thomas Black Nicholas, draper, on the 7th April. John James died in Grosmont on 16 October 1869 and was buried on 20 October 1869, aged 81. Sara James was still in Grosmont in 1871. A Sarah James of Brecon Road, Abergavenny aged 47 died in August 1878 (needs checking).

Among references to the family in the local press, the following appeared in the Monmouthshire Merlin 14 March 1835:

On Tuesday last, an inquest was held at our county prison, on view of the body of Ruth Harry, a female prisoner who died in child-bed, on Sunday the 8th instant. After an investigation of all the circumstances of the case, the jury returned a verdict of "Natural Death." The deceased, who was only 19 years old, was convicted at the last October Sessions for this county, on a charge of stealing a gown belonging to the daughter of her master, John James, of the parish of Grosmont, and sentenced to twelve months' imprisonment.

The following notice had appeared in the Hereford Journal of 10 December 1845:

Kingsfield takes its name from being the place where King Henry III encamped when he was attacked and defeated by Hubert de Burgh in 1232. In the eighteenth and early part of the nineteenth century this place belonged to a family named James, who seemed to have been an old family in Grosmont. It was sold to Colonel Scudamore about 1860. The same family also owned Trevyr, the Grug Lodge, and the Town Farm.

The Town Farm, so called because of its situation at the edge of the town, also belongs to Mrs Gazzard. At the end of the eighteenth century it belonged to William Roberts James, who in 1806, then residing in Serle Street, Lincoln's Inn Fields, married Maria Hodges. He died in 1850 at Lested Lodge, near Sutton Vallance, Kent, having had issue Maria, William, Eliza, Amelia, Helen, Robert Edwards, Henry Brandram, Thomas Lloyd, and Edward Wallwyn.

The house is a very old one, some of it having been apparently built in the early part of the sixteenth century. Over the door is the date 1673, and on the door-frame of the stable 1671.

(pp. 52-53) Town Farm, Grosmont, a fine little house of (...) three-in-two plan (...) is developed from its neighbour, Upper Tresseny (...) for it has the principal entry at the side. (...) Of two storeys, with attic, it is completely unaltered, with original doors, windows, and cupboards throughout. [Footnote states: Part of the back wall of the parlour, beside the farm-yard, fell in 1952.] These windows have the usual angled hoods; they are of four lights, ovolo-moulded, on both floors: the lights are 12 in, wide with intermediate bars. The joists have bull-nose mouldings. (...) the entrance is central, and the whole layout symmetrical. Entering the lobby, a striking and novel feature in our tradition, the stairs to the cellar are opposite; beyond is the pantry; doorways with shaped heads on either side lead to rooms, hall, and parlour, approximately equal in size and similar in character, each with its stairway, to a bedroom above. The house is dated on the outer, rectangular, door head - 1673. The back doorway has a modern frame, but may be original. A stable, dated 1671, is on the opposite side of the road; its chamfered door frame and door are original, as are the decorative "trident" hinge-straps: the tall window beside the door, of seven lights, has diamond mullions. This door and window unit, under the same angled hood, is seen at the house as well as the stable; it is in our experience peculiar to the parish. It enabled the seventeenth century indwellers, man or horse, to have a peep at a visitor. 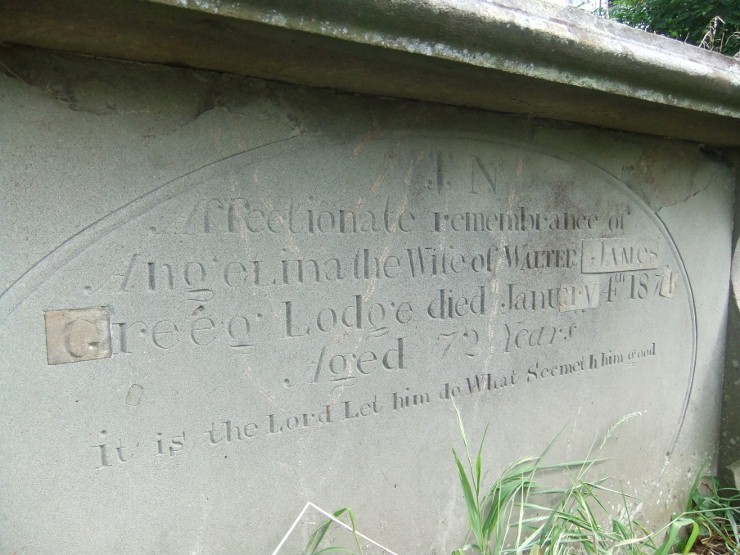 In the marriage settlement of Thomas Edwards and Sarah Delahay, reference to tenements, etc in the parishes of Skenfreth and Grosmont near 'the lands late of Phillip James, of William James, of Jane Phillips, widow of Isaack Williams gent.

Similar but also ending with 'and other lands of Phillip James.'

Reference to 'a house in the town of Grosmont in the possession of Thomas James as tenant..'

Conveyance. Lease for a year with 4 names including William Edmonds of Skenfreth, farmer (filed under Skenfith).

Charles James gent tenant (with two others) recovery of property, land in Grosmont.

DECLARATION OF TRUST
£700 a part share arising out of a sale of a mess farm, cottage and certain lands par. Grosmont, invested in public funds

Monmouthshire Merlin 12 September 1851, leading on from a fire in Llanfoist: "(...) The accident arose from the culpable conduct of the parents of some of the village children, allowing them to have access to their lucifer match boxes. A fire took place last week in Grosmont, from the same cause, when Mr. M'Cormack's barn was destroyed, and about sixty bushels of wheat. Surely there is a law in existence that will reach parents who are so careless as to leave such dangerous articles as lucifer matches within the reach of children."