The Family of John Gillett, Inventor and Manufacturer of Brailes and Cheltenham 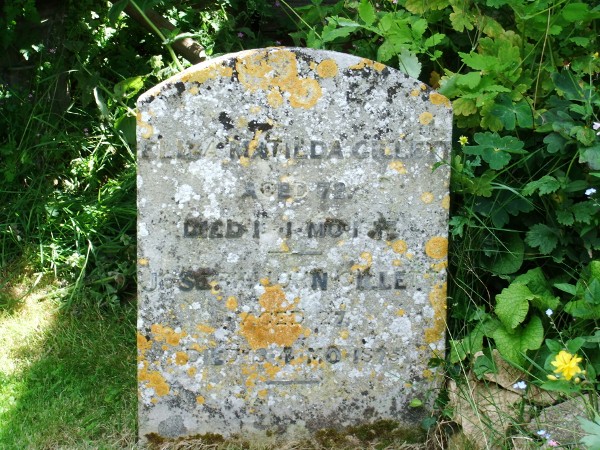 John Gillett died December 17 1869 at Portland Cottage (2 Portland Terrace), Cheltenham now 35 Prestbury Road. Eliza Matilda died January 19 1877 at 11 Albert Place, Cheltenham (subsequently re-numbered 16 and now a listed building) and was buried in Charlbury with her son Joseph John Gillett. John Gillett was initially a wine merchant, then took over his father's farm and plush factory in Brailes. He was also an inventor of agricultural implements - his patented clockwork bird scarer is exhibited at the Museum of Science in Oxford. He also exhibited at the 1851 Great Exhibition.

1. George Frederick Gillett married Hannah Smith (c. 1825-1909) in 1853. They arrived in Victoria, Australia after a 74-day journey from Liverpool on the New Brunswick-built clipper Marco Polo on January 25 1854. The Black Ball Line's Marco Polo was described at the time as the fastest ship in the world but she ran aground the next morning after losing her anchor while waiting for a pilot and was not freed until January 31. The 1871 census shows them in Gloucester with George as a merchant's clerk. They have three children, all born in Melbourne, Victoria, Australia: Victoria Flinders Gillett (1855-1923), Hannah Scuse Gillett (1858-1922) and Frederick Smith Gillett (1866-1892).

2. Emily Gillett married Aquila Warner (1846-1892) of Bristol, a grocer's assistant, at Charlbury in 1871. Aquila was born in Eastington, Gloucestershire and was possibly the son or nephew of Edwin and Mary Warner. Edwin was a grocer/draper in 1851 and an accountant in 1861. Emily and Aquila had a child, Marianna Smith Warner (1876-1942), died York, and both appear to have died in Bedminster (Gloucester/Somerset border) in March quarter 1892. Marianna S. Warner was a creamery assistant in the 1901 census, working at Smith & Co., "The Creamery", at 1 Cornmarket Street, Oxford with her aunt, Marian Smith, born 1866 in Charlbury as manageress (see below). In 1911 she was living in Headington with Sophia, Marian, Annie Caroline and her sister Kate's daughter.

4. Edward moved to Featherston, near Wellington in the North Island of New Zealand. He is not known to have married. Correspondence from others to the family at home suggested he may have had a struggle with alcohol. 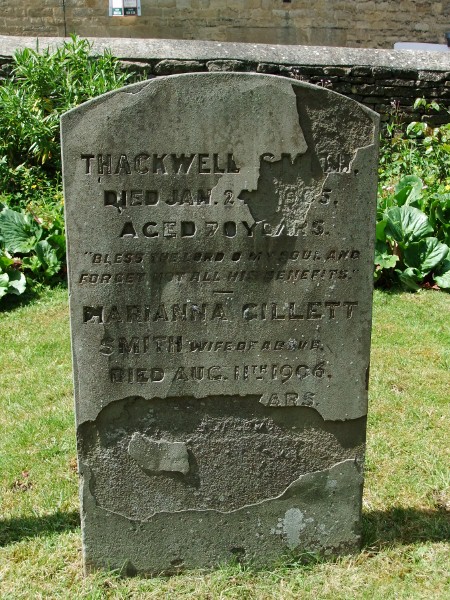 5. Marianna Gillett married Thackwell Smith (1834-1905) of Charlbury, a grocer, at Brailes on September 16 1860. Thackwell was born in Witney to Samuel Smith (born 1790), bacon curer and Hannah Tyler (born 1793) who married 12 October 1827 in Chipping Norton when Samuel was described as a cheesemonger. Hannah was the daughter of Joseph Tyler and Ann of North Newington, Oxfordshire. In 1841, Thackwell, aged 6, was living with his maternal uncle, John Tyler and family at Broad Street, St. Lawrence, Reading. In 1851, he was living in Bridge Street, Witney with his mother Hannah (48), grocer and draper, and sisters Lydia Ann Smith (c. 1830), Sarah Smith (c. 1834) and Ann Tyler Smith (c. 1837). Witnesses at Samuel and Hannah's wedding included William Coles of Chipping Norton, druggist (someone who prepared drugs for sale) and William Albright (1815-1909), draper of Charlbury. William Albright was a prominent Quaker and Thackwell's employer, who handed the business over to him in 1858. 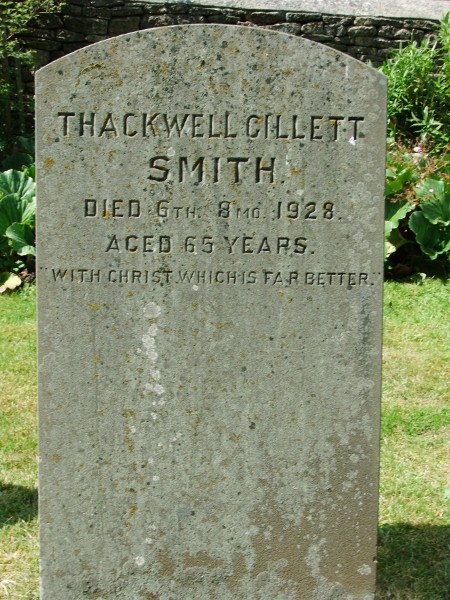 6. Sophia Matilda married Henry Charles Langbridge (1834-1922),an ironmonger of Hastings, at the Parish Church in Cheltenham on July 28 1868. Sophia Matilda died in London 1871. Sophia's husband was born 10 July 1834 and baptised at St Philips, Birmingham on 21 Aug 1834 he was the son of Henry Charles Langbridge (a Birmingham bookseller) and Sarah Sophia Lingham. After Sophia Gillett's death, Henry married Jane Collins in Hastings (1876). Jane Collins died in 1929 aged 95.

In the 1881 census George was living with his aunt Marianna and her husband Thackwell Smith (46) at Church Street, Charlbury, Oxfordshire. Robert Scuse (12) was at Sibford School (Sibford Ferns, Banbury, Oxfordshire) - established as a co-educational school for the children of Quaker families in 1842 and still active. Based on the old Manor House at Sibford, it was bought from Joseph Harris for £1200 with money provided by Joseph Ashby Gillett, the older Robert's uncle. The younger Robert Scuse Gillett died in Melbourne, Victoria, Australia in 1917 leaving an estate worth £44,585 to his brother George as sole next of kin. The younger Robert was MD of Anthony Horden & Sons.

George married Fanny Charlotte Carvill (1866-1944) born in Camberwell, London. They married in East Grinstead in September quarter 1887. In 1891, they were living in Park Street, Charlbury. George was a general decorator; by 1901, they were living in Dudeneys, Lewes, East Sussex. In 1911, they lived at Ivy Cottage, St. John's Street, Lewes. George was a general house decorator. George and Fanny Gillett both dies in Lewes. They had: