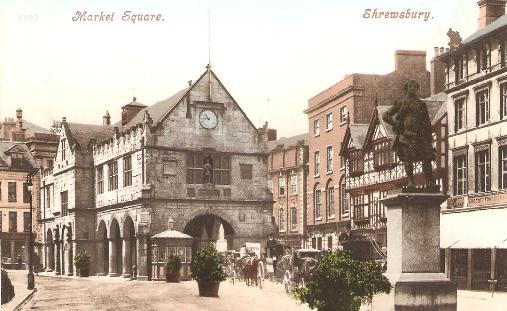 Shropshire (Salop) is an English border county extended by Henry VIII in 1535 to include the Marcher Lordships of Clun, Chirbury, Oswestry and Whittington. Before the Norman invasion, the county appears in history as the site of Roman Wroxeter (Uriconium) and the reoccupied iron age hillfort of the Wrekin (possibly Pengwern, the old capital of Powys. Surviving remains in the Wrekin incude an inner enclosure of 2.6 hectares, with a single rampart encompassed by and an outer 2-3 rampart enclosure of 8 hectares. Offa's Dyke represents an old boundary when the county was part of Anglo-Saxon Mercia.

Apart from Wroxeter itself, late Iron Age and Roman occupation in Shropshire has proven difficult to identify as rural sites tend to be 'aceramic' (very few pots). According to Mattingly (2007:408) 'there are fewer than ten villas in the Shropshire plain and none of these is of any great size or complexity.' He concludes that 'the typical settlements of the territory were dispersed enclosed farmsteads, though there is a greater prevalence of rectangular enclosures near Wroxeter and of curvilinear ones further away. Both types seem to have Iron Age origins and to have continued into the Roman period.'

The site at Wroxeter indicates continued occupation after the end of Roman rule (Mattingly, 2007:338 ):

'... meticulous excavation of the baths basilica site at Wroxeter has revealed evidence of continued orderly use of the structure long after its original function ceased in the fourth century. Even when the roof was removed, the floor was carefully repaved with reused stone tiles, perhaps as an open market space. Regulation of public space by an urban authority appears to have continued here well into the fifth century, before the site was finally taken over by what looks like an individual remodelling of the area round a timber hall.'

When William of Normandy conquered England, Shropshire was dealt with in the feudal manner (Carpenter, 2004:84):

'... the great lay and ecclesiastical landholders (...) 'held' their land from the king. Such men came to be called 'tenants in chief'. In 1086 they had probably all performed an act of homage in which they knelt before William, placed their hands between his and swore allegiance for the land they held from him. The land was usually called a feodum, that is a 'fee' or 'fief': hence 'feudalism'. The ceremony of homage was solemn and consequential. Breach of the oath was treason and involved the forfeiture of the fief. In return for its tenure, the Conqueror required each tenant tp provide contingents of knights either for the royal army when it was called out or to guard royal castles, the individual quotas (on the evidence of a survey in 1166) ranging from fifty or sixty knights down to a handful.'

Shrewsbury
Some historical notes about Shrewsbury.

Mattingly, David (2007) An Imperial Possession: Britain in the Roman Empire, 54 BC - AD 409 (The Penguin History of Britain), Penguin.