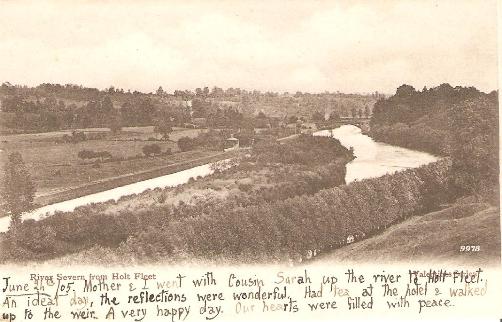 The county of Worcestershire evolved from part of the territory of the early medieval Hwicce, seemingly a mixed British and Angle territory under the suzerainty of Mercia. As the first bishops of Worcester were called Episcopus Hwicciorum, it is likely that the diocesan boundaries coincided with the Hwicce territory and extended into modern Glocestershire and Warwickshire. It is possible also that this represents a continuation of the Roman civitates created from the tribal lands of the Dobunni.

'Who were the Hwicce? In the Tribal Hidage, a list of Anglo-Saxon peoples and kingdoms emanating from Mercia, perhaps in the late seventh century, they are assessed at 7,000 hides. This puts them in the middle rank of the groups included, comparable with the East or South Saxons, and exceeded only by such important kingdoms as Mercia, East Anglia, Kent and Wessex. (...) It is possible that the Hwicce were a political entity created by the kings of Mercia, who installed a ruling dynasty over a mixed British and Anglo-Saxon population. The names of the ruling house of the Hwicce have been used to suggest that they came from a branch of a Northumbrian royal family.'

The absence of pagan Anglo-Saxon remains over much of the southern Hwicce territory, and the establishment of St Helen as the principal church in Worcester before the creation of the Anglo-Saxon see, according to Bassett (cited in Baker, 2004:16), supports the notion of continuity as a Christian community. By the time of the Domesday Book, the estates of the Bishops of Worcester were extensive and valuable.

Iron Age remains have been found in Worcester itself and recent excavations at the Butts Dig have indicated that the city was the site of a much larger Roman-period settlement than was previously thought.

Dyer, Christopher (2008) Lords and Peasants in a Changing Society: The Estates of the Bishopric of Worcester, 680-1540, Cambridge University Press