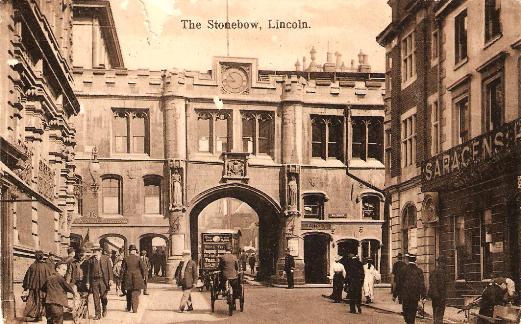 I send you a sketch of an open fireplace and chimney discovered last summer in the old Deanery House at Lincoln, which is now being taken down, and near to the site of which a new residence is to be erected. They were hidden by bricks and plaster, and had been so probably since the year 1616, when the house was modernized and repaired during the period Staunton was dean and Parker precentor. The initials of the latter, with the date of the year, were cut in the front of the parapet over the bow window then projected from the south side of the building, six years after the famous Tom, the predecessor of the present bell, was cast in a furnace erected for that purpose in the minster yard. The fireplace and chimney are, no doubt, a remnant of the old deanery house which Camden tells us was founded by Dean, afterwards Bishop, Gravesend, in 1254; they are therefore a very interesting object of antiquity.

The sketch represents one of two chimneys placed back to back on the first-floor between the late dean's drawing-room and the study, but they were both concealed until the work of demolition began. The underside of the mantel, which is composed of one stone 6 feet long by 13 inches high, stands 6 feet from the floor, and the pyramidal head of the chimney is 9 feet above the three-inch projection over it, and it is composed of nine courses of tooled masonry, terminating at the ceiling with an apex one foot wide. The mantel, which has a projection from the wall of 30 inches, is supported by double corbels, and the whole, after a lapse of nearly six centuries, is in excellent preservation. The stones on each side are not jointed, so that the walls of the room were no doubt either plastered or covered with oaken panels. The corbels are canted, but in other respects quite plain, with the exception of a rude ornament something like a trefoil on each side of the two lowest. The recess in the wall is only 5 inches deep, and the back of the fireplace is composed of flat tiles placed edgeways.

The gatehouse, built by Dean Flemming, comes down. It is very much to be regretted it could not have been preserved as it is a fine old tower. ... F. B.

The front of an old house in the centre of the City of Lincoln has recently been taken down, and on removing the laths and plaster with which it was externally covered, some fine old windows were exposed to view, and as they were very curious and varied in their style, and were probably a fair specimen of the sort of buildings of which old Lincoln was composed, I made a sketch of them for your magazine. The windows were boldly carved in oak, and you will perceive they were let into the braces which were placed to support the timbers. The sketch represents the house just as it appeared after the roof had been removed, and nothing left over the comparatively modern shop-windows below, excepting the oaken framework of the front of the old dwelling. All the lower parts of the front had been modernized, and no part of the ancient work left in the basement story excepting the doorway, which was composed, like the windows, of oak, and was quite plain; it was, however, large in its dimensions, being not less than 9 feet high, by 4 feet wide.

I think I am not far wrong in presuming the work was a specimen of the domestic architecture of our city, as far back as the early part of the fifteenth century. FREDERICK BURTON. 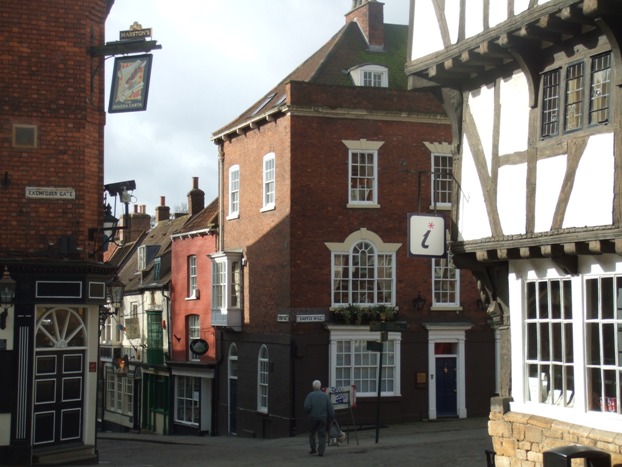 The accompanying drawing of a stone to the memory of a Roman soldier was brought to light on the building of a new house on the New Road, opposite the gaol in Lincoln. It appears to have resembled a headstone, and to have been broken off just by the ground. The Romans first enclosed their camp at the top of the hill, the south side being at the brow thereof; this was about forty-five years after Christ, and in the reign of the Emperor Claudius. Afterwards, as the colony increased, the camp was extended to the bottom of the hill, keeping the east and west walls in a line with the east and west walls of the old camp. The stone in question was found in the foundation of the east wall of the new camp, which may be accounted for in the following way : It is made out of a block of Lincoln stone. ... I conceive it was erected in the time of the first camp, but that it perished and was broken off previous to the camp being enlarged, when it was brought down as a building stone, and laid in the foundations of the new wall in the situation before described. The areas enclosed by the first and second camps are easily traced at the present day. . . .

The two first lines on the stone are perfectly distinct and legible, and show that it was erected to the memory of a Roman soldier, Lucius Sempronius Flavinius, of the 9th legion: but at the beginning of the third line there is a singular letter, like the letter (q) inverted, which no one yet has satisfactorily deciphered. The inscription was probably never completed, but the following reading has been suggested:

"(The tomb) of Lucius Sempronius Flavinius, a soldier of the 9th legion, Quadrata Alauda, commanded by Julius Severus, of seven campaigns, and of thirty years of age. Leria, of Spain, was his native city." ...

It may be as well to mention that detached pieces of the Roman wall still remain in several places.

I also send you a drawing of a Roman lamp found in the same place as the stone, and at the same time, both of which are now placed in the Mechanics' Institution of this city. J. S. PADLEY.

At Lincoln last year a Roman tombstone was excavated at the corner of Salt House Lane in the process of digging for the foundations of a house. Salt House Lane occupies a portion of the .cemetery of Roman Lincoln, adjoining the Roman road called Ermine Street, which runs north and south to the west of it.

The stone is 7 feet long, 2 feet 1 inch wide, and 8 inches thick. At the base is a dowel 6 inches long, proving that the stone was fixed originally in a stone pediment. The top is cut in a common Roman altar form, with triangular features on either side, below which are circles containing leaf-like ornaments carved in shallow relief. Beneath, in a sunk panel, with a moulded border, is inscribed in large, legible letters: