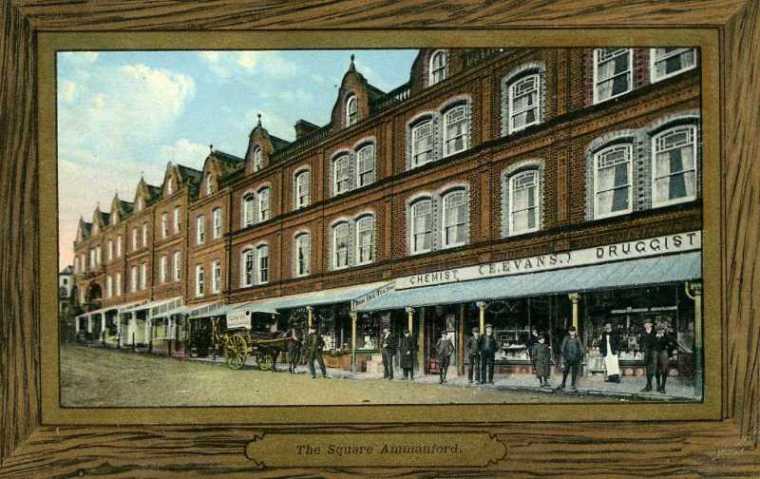 People have lived in the Aman Valley on the borders of Carmarthenshire and Glamorgan for thousands of years - evidenced by several bronze age cairns that remain on Mynydd y Betws and Mynydd Du such as Tair Carn Isaf and Tair Carn Uchaf. However, material and written remains of all the people who have lived in the district are scarce. The cairns themselves are ruinous and remains of the individuals and the possessions that were in them are scant as they were used for interring cremations. An item from the pre-Roman period, a neolithic flint axehead picked up in a school playing field in Ammanford is unusual. (See The Archaeology and Early History of Ammanford).

The Romans did not build a fort or town in the area, nor did they drive a road through the valley but a few coin finds indicate some Roman influence and major sites such as Carmarthen (Maridunum) and gold mines at Dolau Cothi are not far away.

After the Roman empire withdrew we hear a little about the Aman Valley in the myths of early medieval Wales. The story of Culhwch and Olwen tells us about the hunt for the boar Twrch Trwyth by King Arthur and his warriors through Dyffryn Amanw. Many of the placenames and legends in the area follow the story, such as Cwmtwrch and 'Gwely Arthur' on Mynydd Du where the King is supposed to sleep to this day, according to the legend.

In the days of the Princes and the Normans the Aman Valley was a border land between the rulers of Dinefwr and the invaders in Gower. (Part of the upper valley which became the Manor of Caegurwen) remained in Glamorgan and Neath-Port Talbot while the remainder is in Carmarthenshire.) Probably there were violent clashes in the locality between the two but there are no written accounts testifying to the conflict. The valley was part of the commote of Iscennen in Cantref Bychan, guarded by the impressive castle of Carreg Cennen, and was totally Welsh until the conquest. The remains of an earth and timber motte and bailey castle also exist at Tir-y-Dail, Ammanford. There is some dispute as to whether or not this was a Welsh or Norman construction, although the evidence seems to favour the former.

Feuding continued throughout the thirteenth and fourteenth centuries while the ancient forest of Glyn Amman, south of Mynydd Du, was favoured hunting territory. With the river Aman as a boundary between parishes (particularly Bettws and Llandeilofawr) and Hundreds, people were not identified with the Aman Valley as such. For example, John Jones on this page is identified with Trap - but, in fact, lived on the mountainside above present-day Glanaman.

Throughout later centuries the Aman Valley remained a quiet agricultural area with little of the history of its inhabitants recorded until the 1800s when industrialisation began and new communities with new names such as Ammanford, Glanaman and Brynaman grew around coal mines and tinplate works. A topographical dictionary of the United Kingdom of 1808 stated that the parish of Bettws had 111 houses and 538 inhabitants. THe 1829 edition of the same publication gave 189 houses and 1026 inhabitants. The 1861 census had 1547 people for the parish. The Welsh text Cymru records in 1871:

'In 1835 the Llanelly Dock and Railway company received parliamentary approval to extend the railway from Llanelli to Llandeilo, with branches to Cwmaman, Brynaman, Spith and Mynydd Mawr to link the anthracite areas with Llanelli Docks; for this work they were given permission to raise a loan of £250,000. It was made ready as far as Cross Inn and Cwmaman in 1841 at a cost of £248,621. For a number of years it carried coal only but now it reaches Llandeilo, where it joins the Towy Valley Railway, and carries passengers, with all kinds of goods.'

Sharpe's road-book for the rail, eastern (western division) published in 1855 lists the stops after Ponardulais:

"CROSS INN on the Llwchwr, near Bettws, where the Amman joins.
CROSS KEYS is next passed; then -
GELLICEIDRIM, and -
GARNANT. From Cross Inn, as above, an omnibus runs eight miles north, to
LLANDILO or LLANDILOFAWR ...