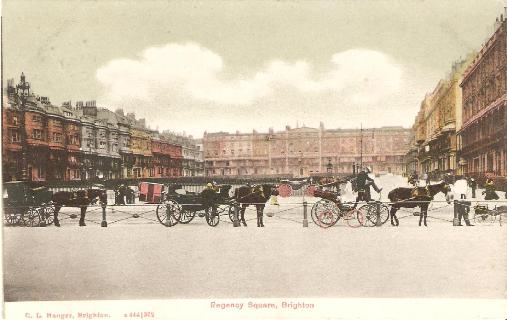 'The houses on the King's Road generally consist of elegant residences and excellently constructed lodging-houses, and extend nearly as far as Brunswick Town. Artillery Place, Cannon Place, Queensbury Place, Regency Square, Preston Street, Oriental Place, Bedford Square, Western Place, Russell Square, &c. are all in this neighbourhood; and Grenville Place, Clarence Place, Regent Place, &c. almost overlook the whole of them, from the distance and gradual rise of the ground on which they are situated northward.' (History of Brighton and its Environs (1827) by Richard Sicklemore, p. 108). 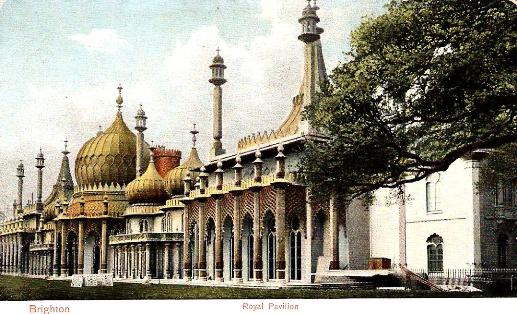 'The erection of this regal edifice was commenced in 1784, by erecting to the north of the house first hired, and afterwards purchased, of Mr. Kemp, a circular building, with a lofty dome raised on pillars, together with another building, precisely corresponding with the former, the dome thus forming the centre. This remained until 1812, when additional wings to the north and south were added; and, in 1814, Grove-house became the property, by purchase, of the Prince Regent, and was incorporated with the Palace.

'The grand entrance to this magnificent seat of royalty, as it now appears, is westward, where, passing through the vestibule and hall, you enter one of the most superb apartments that art and fancy can produce, and which, for richness in effect, and dazzling brilliance of decoration and design, is not to be equalled in Europe.' (History of Brighton and its Environs (1827) by Richard Sicklemore, p. 36).

'As we have the grateful privilege of introducing our readers to the interior beauties of this grand and elegant palace, we shall the less dwell on its exterior, because it is known not only by personal observation to the visitors of Brighton, but by some species of description or delineation to almost all the inhabitants of the kingdom; yet we must apprise them that the generality of views so far come short of a just appreciation, that they may almost be termed, by comparison at least, caricatures. It is a building of great length, and of a depth not clearly discernible except in the inside. The garden-front, facing the Steyne, consists, in effect, of three pavilions, connected by two ranges of building; the centre has the large bulbous-shaped dome, so much resembling those of the churches in the Kremlin at Moscow, and flanked by minarets, consisting of open cupolas on tall pillars. The external pavilions have large pagoda spires, tapering to a point from a broad base, and very commanding in their appearance; these have also flanking minarets, and there are two smaller domes on each of the connecting wings. The height of the centre dome is 130 feet; in front is a semi-circular colonnade, and a long flat one to each of the farther pavilions. The general aspect of this front is rather Indian or Persian than Chinese; when examined in detail, it will be found very beautiful. The opposite, or western front of the Pavilion, is nearly similar, but has a centre projecting rather more in advance, with a neat square portico, supported by pillars.' (An historical and descriptive account of the coast of Sussex (1833) by John Docwra Parry, p.114)