KEW, a parish in the second division of the hundred of Kingston, county of Surrey, 65 miles (W. by S.) from London, containing 683 inhabitants. The village is pleasantly situated on the southern bank of the Thames, over which a handsome stone bridge of seven arches, replacing a former structure of wood, was erected in 1789, connecting it with Brentford. George III., who resided for a considerable length of time in a mansion since called the Nursery, in which most of the royal family were brought up, and in which his consort Queen Charlotte died, greatly improved and extended the gardens, which he united to those of Richmond, and began to erect a royal palace in the ancient style of English architecture, which, after remaining for several years in an unfinished state, was taken down in 1828. The royal gardens, which are supposed to contain one of the most extensive and complete collections of exotic plants in Europe, are tastefully laid out, and embellished with temples of the various orders of Grecian architecture, a Turkish mosque, and a Chinese pagoda of considerable elevation, from the summit of which a most extensive prospect is obtained of the scenery on the banks of the Thames, and of the surrounding country. The Dukes of Cumberland and Cambridge have residences on the south side of the green, and in the environs are several handsome villas. Kew, formerly a chapelry to Kingston, was constituted a separate parish by act of parliament in 1770. The living is a vicarage, with the perpetual curacy of Petersham annexed, in the archdeaconry of Surrey, and diocese of Winchester, endowed with £600 private benefaction, and £600 royal bounty, and in the patronage of the Provost and Fellows of King's College, Cambridge. The church, dedicated to St. Anne, was built by subscription among the inhabitants, in 1714, on a site given by Queen Anne, as a chapel of ease to the vicarage of Kingston, and made parochial in 1770: it was enlarged by George III., who built the side aisles and the portico; and his late Majesty, George IV., erected the organ gallery, and presented to the parish the organ on which his royal father had been accustomed to play. The free school was founded, in 1721, by Dorothy, Lady Capel, who endowed it with one-twelfth part of an estate at Faversham, at present producing about £450 per annum, which sum is divided by her trustees in the church at Kew among twelve parishes, of which Kew is one: the sum arising to each is £37. 10., which, augmented by annual subscriptions, is appropriated to the instruction of nineteen boys, of whom two are apprenticed yearly: the schoolhouse was erected in 1824, to which his late Majesty munificently contributed, and granted it the appellation of "The King's Free School." (A Topographical Dictionary of England, 1831, p.516) 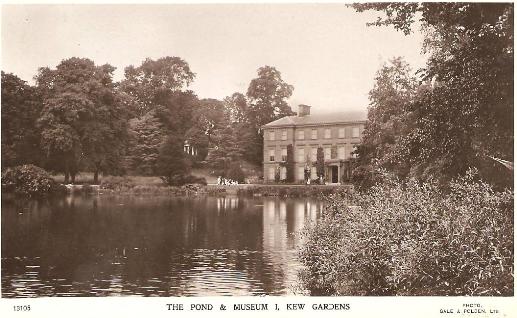 In honour of the King's birthday, June 4, 1783, the first stone, being the west salient angle of Kew Bridge, was laid by M. D. Sanders, Esq., proprietor of a bridge at that time building at Walton, higher up the river. The ceremony was attended by Robert Tunstall, Esq., proprietor, Messrs. James Payne, sen. and jun., the architects, master-workmen, and others. A large company of neighbouring gentlemen and friends of the proprietor were entertained in commemoration of the event. Pending the summer, two piers for support of the centre arch were completed. The following year the proprietor thought proper to open a subscription for a tontine, the benefit of the sole property ultimately reverting to himself or representatives. Every saving was now to take place, the plans and elevations were new modelled, the intended width of the road diminished, the elevations stripped of their picturesque ornaments, the bold Doric entablature and the rusticated fronts pillaged from the semicircular abutment-arches; these arches were intended to support attics, adapted to the purpose of the toll-house and other uses. Finally, to save expense, it became necessary to build the land-arches and wing-walls that conduct to the body of the bridge with brick, a material neither beautiful of itself in point of colour nor durable, like stone. The foundations, piers, arch-stones, and all stone employed in this fabric, as high as the torus cap that bears the plinth of the balustrade, is brought from quarries at Purbeck. The compactness of texture, and other requisites, evinces a material well adapted to aquatic buildings, the masonry and other workmanship well performed. . . .

On September 22, 1789, the anniversary of the King's coronation, the bridge was opened to the public; the period commemorated by a superb entertainment at the expense of Robert Tunstall, Esq. It was the intention of the architects to erect an obelisk, supporting a large globe-lamp containing reflectors, facing the bridge, by the side of the footpath that leads from the Star and Garter to Brentford; a picturesque approach from the western road, a most needful protection to the passenger, and in other respects not divested of use. BOCCA DELLA VERITA. 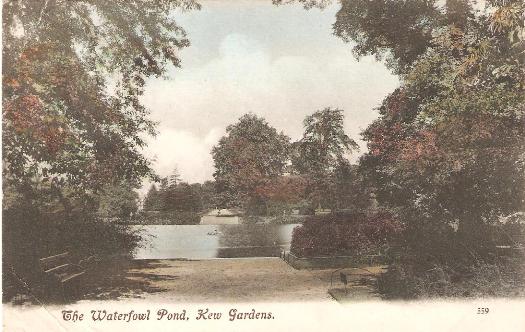 Kew Gardens: Historical Accounts
The exotic, or as it is usually called, the botanic garden, was established in the year 1760, by the Princess Dowager.