A Victorian Tourist in Stromness 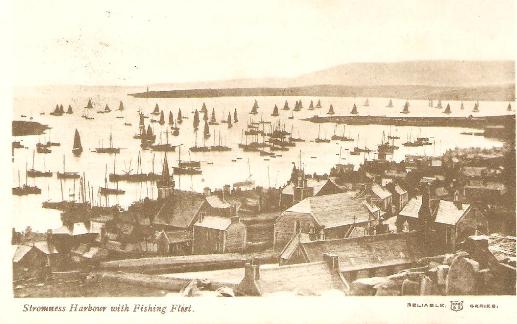 The scenery in the vicinity of Stromness is the finest in Orkney, and I have reserved this district until now as a kind of bonne bouche. On the occasion of my first tour through the Mainland I was agreeably surprised, after traversing the somewhat monotomous road between Kirkwall and the Bridge of Wraith, to catch a glimpse, from the healthy ridges above the road, of Stromness quietly resting under a canopy of blue smoke on the margin of its land-locked bay, while the heights of Hoy rising beyond added grandeur to the beauty of the scene. The town, which consists of one narrow mile-long serpentine street, with branching lanes and angular high-perched houses, is picturesquely situated on the lower slopes of the hills that form the western border of the bay. The houses on the higher grounds command fine and far-extended views of sea and shore, and the general appearance of the place has been greatly improved of late years by the erection of some handsome public edifices. In this town, so quaint and quiet, the sea is a domestic institution. It ripples familiarly up the short lanes between rows of houses, and the bows of vessels stretch across second storey windows. Pilots can row up to their own doors in boats. It is doubtless owing to this circumstance that so many of the youth of Stromness take early to the water, and embark on board ship for all quarters of the world. Several of the houses, adjoining the harbour, are provided with little stone jetties, which enable the inmates to step dry-shod from their firesides into fishing-yawls.

The population of Stromness is mainly composed of traders, shopkeepers, and shipowners, many of whom are the proprietors of houses and small pieces of land. At the period of a general election they grow in importance, since their votes can turn the scale either for or against the county candidate. At one time, when the commodious and splendid harbour of Stromness formed the great rendezvous of the Davis Straits' whalers and the Hudson's Bay Company's ships, the trade of the town was very considerable, and few sea-ports in Scotland of similar size were in an equally prosperous condition. But the whalers no longer resort to the harbour, and the change in the circumstances of the Hudson's Bay Company has made the annual visits of the vessels occurrences of slight importance. From three to four hundred men went every year from the town with the whale-ships, and numbers of labourers and artisans were also hired annually to go out to the settlements in British America when the Hudson's Bay vessels made their appearance in the month of June. In the palmy days of the Company, the arrival of the ships to engage their complement of hands, and lay in a stock of provisions, created no small stir of animation in the little trading seaport. The officers of the Fur Fleet exchanged hospitalities with the leading inhabitants, and a succession of routs and balls made the midsummer season the gayest of the year. It is worthy also of record that the discovery ships of Captain Cook, Sir John Franklin, and Sir John Ross remained some days at Stromnessin going out or returning from their celebrated expeditions.

The burgh of barony cannot compete with the sister royal burgh in interesting antiquities, but it possesses what Kirkwall lacks - a well-arranged and extensive museum, the property of the Orkney Natural History Society. The principal hotel of the place, commodious and well-appointed, would do no discredit to southern towns of fashionable resort. Tourists are invariably loud in its praises, and Mr. Weld almost went into ecstacies when he found in every bed-room combs and brushes, night-caps and slippers. Through the town, from the narrowness of its zigzag main street, and the singular sites selected for some of the houses, has a wonderfully auld-farrant appearance, it is comparatively modern, and the best buildings are of recent erection. At the time when the Pretender was skulking in the Isle of Skye, it consisted only of half-a-dozen houses with slate roofs, and a few scattered huts, the abodes of poor fishermen. Ten years after the defeat of the rebels at Culloden, it contained no more than six hundred inhabitants. The monopoly of trade, vested at that period in the royal burghs, prevented the growth of less privileged communities, and the struggling traders of Stromness seem to have suffered from this cause. In those old days the royal burgh of Kirkwall considered itself entitled, in terms of an act of William and Mary, to impose an assessment upon Stromness for the payment of cess or stent. This burden - galling enough there can be little doubt - was borne for a series of years, but the villagers, alive at last to the injustice of the tax, rebelled against its imposition, and the matter in dispute was referred, in the first instance, to the Convention of Royal Burghs. It then found its way to the Court of Session, where a decision was given in favour of Stromness. The case was appealed to the House of Lords, and with Mr. Wedderburn, afterwards Lord Chjancellor Rosslyn, for counsel, the villagers succeeded in getting the decision of the Court of Session affirmed. The battle thus fought by the plucky little port benefited the whole of Scotland, and broke down the trade monoploy of the royal burghs. As regards Stromness the removal of the impost had a most beneficial effect, and in 1817, when the population numbered two thousand, the town was erected into a burgh of baronry. It is not improbable that the above incident in the annals of the two towns may account for the continued existence of rivalries and jealousies, although the old battle in the law-courts has become a dusty tradition.

The publication of Hugh Miller's Asterolepis of Stromness gave celebrity to the neighbourhood of the town as one of the most interesting geological districts in the northern counties of Scotland. The country around is rich in fossiliferous deposits, and the followers of the stony science may not unfrequently be encountered wandering about the hills, knapsack on shoulder and hammer in hand. It was after reading Miller's attractive account of his geological explorations in the vicinity of Stromness, and his summer evening rambles round the loch of Stennis, that I first felt a strong desire to visit the Orkney Islands. The perusal of that remarkable work had enabled me to form a mental image of the scenery surrounding the West Mainland town, but the reality was even finer than the picture which fancy had hung in the "chambers of imagery." From the Look-Out and the other heights behind Stomness the view is of the most superb description. Climb with me these healthy and breezy slopes on a pleasant autumnal day, and away to westward you see the waters of the Atlantic glittering in the afternoon sunshine, while ever and anon light fleecy clouds, sailing over the heavens, checker the surface of the sea. Opposite, on the southern side, across the Sound, with its swift-rushing tides, rise the dark and precipitous hills of Hoy, which hold, as with some wierd attraction, the spectator's eye. Seamed and scarred by the storms of centuries, they have an aspect of wild loneliness and desolate grandeur. The sea smiles in the sunlight, but they never lose their look of dark sublimity. In the great hollow between the heights the shadows condense into a gloom that might be felt. The effects of light and shade, on this autumnal afternoon, are profoundly touching in their almost unearthly beauty. Here and there, on the lower grounds, patches of green come out vividly in sudden gleams of light, forming a striking contrast to the overhanging gloom of the wierd and withered hills. The low emerald isle of Graemsay, with cattle grazing amid its pleasant pastures, lying along the waters beneath the lowering brows of the giant heights, enhances still more the wonderful effects of contrasted beauty and gloom. Wreaths of misty vapour, wafted from the wide Atlantic, seem ever ascending and descending the precipitous sides. No sooner has one mist-cloud drawn up its thin skirts to the topmost pinnacle and melted into thinner air, than another descends, and again the white wreaths rise seething and curling out of the gloom below.

At the turn of the tide, observe how the swift waters from the Atlantic rush through the mouth of the sound between the Black Craig and Hoy Head. Eddying and swirling like a great river in the flood, they sweep onwards with resistless strength. With sails set, for the breeze is favourable, a fishing yawl has gained the centre of the rushing stream, and she tears along with giddying speed, swifter than if propelled by the power of steam.