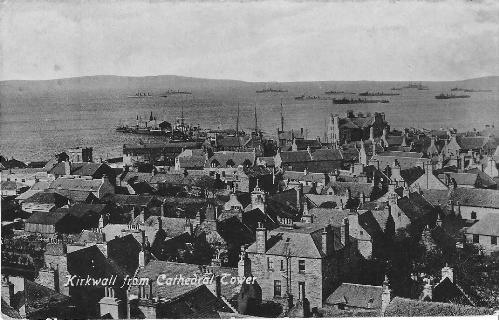 Kirkwall is the capital of the Orkney islands. It is the main ferry port for the northern Orkney islands, terminal for cruise ships (Orkney is the second most popular cruise destination in Britain) and cargo vessels and the market town for the county. But, because of its cathedral, Kirkwall is also a city . The first recorded description of Kirkwall appears in the Orkneyinge Saga when the rebel Norse jarl Rogvnald Brusason spent the winter of 1046 there with a large household. Kirkwall was described as a market-centre with just a few houses. However, an earlier settlement site of Iron Age or Pictish date (in the vicinity of the present RBS Bank) was identified when roadworks were conducted in 1986. According to Raymond G. Lamb* (1995:45):

'To understand the town-plan it is important to know that the long main street - represented by Bridge Street, Albert Street, Broad Street, Victoria Street, Main Street - originally ran along the waterfront, as it still does at Stromness and Lerwick (although these towns are no older than the 17th century). Most of the original harbour, the Oyce or Peerie Sea (...) has been filled in, and most of that infilling has taken place since 1865. Shallow-draught ships of Viking type could have come as far south as the spot where the Catholic Church now stands (...), 800m from the present harbour. From here it is only 2km across a flat, sea-level isthmus to Scapa Bay, and ships trapped by adverse winds may well have been hauled across the isthmus to be launched from the other bay. From a maritime viewpoint, therefore, this is an attractive situation, and the narrow isthmus between the eastern and western parts of the Mainland ensures that land traffic must also pass Kirkwall.' 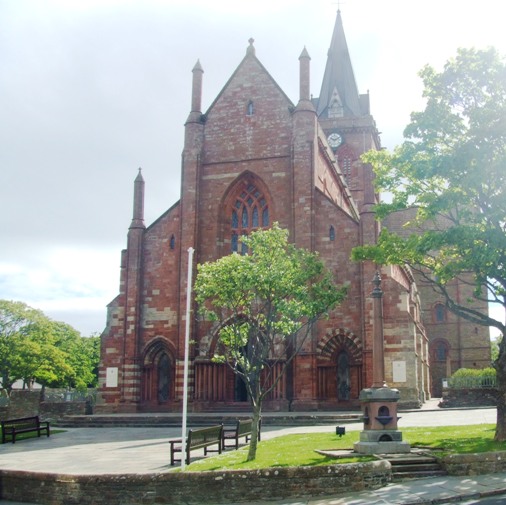 Kirkwall's most significant building is the magnificent St Magnus Cathedral founded in 1137 by jarl Rognvald Kali Kolsson and built in the Norman style. It was not completed until the 15th century. Given that Kirkwall only has 7000 inhabitants, this is a spectacular equivalent of a 'parish church'. Mitchell (2004:74) notes that '(sadly) the Reformation saw the wholesale destruction of the rich decorative embellishments which used to adorn the interior. Now it is rather plain, especially in the nave.' 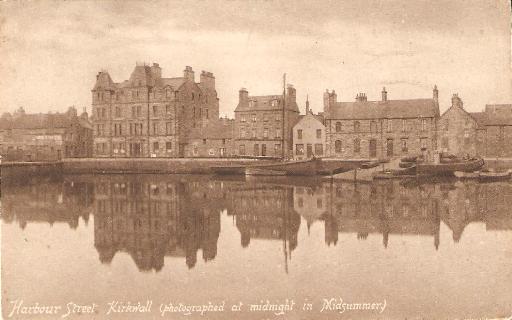