The Language of Cardiff 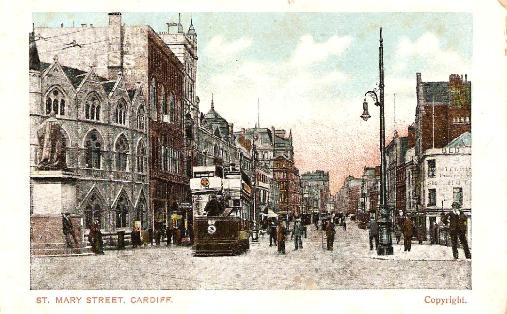 Rhys and Brynmor-Jones (1906:525) refer to a Directory and Guide to the Town and Castle of Cardiff published in 1796 which throws light on the linguistic condition of Cardiff at the end of the 18th century:

At that time the town was chiefly an agricultural centre for the surrounding district, and "great quantities of oats, barley, salt butter, and pultry of all kinds" were sent from it to Bristol. In the Directory Welsh names largely prevail: e.g. out of 127 traders 79 had Welsh names; in the professions of law and physic fout out of the five names were Welsh, though under gentry there were only three Welsh names out of nine.

They also cite the enquiries of Mr John Ballinger among the 'oldest inhabitants' of Cardiff on behalf of the Welsh Land Commission. Mr Ballinger said:

"that early in the 19th century Cardiff was a bilingual town, that English was freely used and understood by most of the inhabitants, but that a large amount of Welsh was spoken, particularly in the houses, and that, so far as Cardiff was a centre for markets and fairs, it was almost exclusively a Welsh centre."

Cardiff also has distinctive accents. In the 1960's Gwyn Thomas (1964:139), a valleys man, described the speech of Cardiffians in the following way:

'The speaking voices of this city fascinate. The immigrant half, the visitors from the hills, speak with a singing intonation, as if every sentence is half-way into oratorio, the vowels as broad as their shoulders. The Cardiff speech, a compound of the native dialect and a brand of High Bristolian, gives an impression of a wordly hardness. They speak of 'Cairdiff', 'Cathays Pairk', and for a long time it is not amiable to the ear. There is an edge of implied superiority in it to the rather innocent and guiless opneness of the valley-speech.'