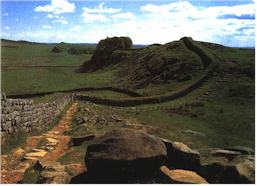 "In 397 Britain was part of a Europe-wide state, the Roman Empire, with a single currency, a centralised military and legal system, and an elite connected to a transnational culture spanning western Europe and the Mediterranean with Latin as its official language. While the Roman Empire itself was officially Christian by this date, most of the ruling elite of Britain remained Pagan, and temples rather than churches dotted the late Romano-British landscape. The population as a whole appears to have retained pre-Roman, 'British', tribal and cultural identities and to have spoken a 'Celtic', not Germanic language" [Dark, K. (2000), Britain and the End of the Roman Empire, Tempus].

Over the next few centuries Britain was transformed. What happened? Why did Roman rule come to an end? As Dark points out, the end of Roman rule is often portrayed as a uniquely catastrophic, British event. In fact, it was part of a process that affected the whole Western Roman Empire in 'Late Antiquity' - itself an unfamiliar term in the British context. Peter Heather (2005: 39-40) comments:

"The old Ladybird Book of British History had a vivid picture of Roman Britain coming to an abrupt end in the fifth century with the legions marching off and the Roman names for places being superseded (a composite image of departing soldiers and broken signposts, as I recall it). But this is a mistaken view of what happened. By the late Empire, the Romans of Roman Britain were not immigrants from Italy but locals who had adopted the Roman lifestyle and everything that came with it. A bunch of legionaries departing the island would not bring Roman life to an end. Britain, as everywhere else between Hadrian's wall and the Euphrates was no longer Roman merely by 'occupation'.

Dark outlines four main interpretations in the debate on this period - plus his own view:

The Romanized zone employed Anglo-Saxon mercenaries who rebelled in the fifth century and quickly took control. The west retained their independence but were under the overlordship of Anglo-Saxon kings. The Anglo-Saxon rulers retained elements of Roman administration while their western counterparts adopted Anglo-Saxon culture because of its higher status.

Dark takes issue with all four interpretations. Specifically, he contests a number of key points they have in common:

Dark argues that Britain shared many aspects of Late Antique Romano-Christian culture with its European neighbours. In fact, he believes, Britain retained more of the Roman traditions than many other regions of Europe.