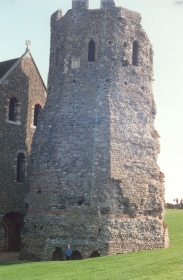 Early in the following year, a combined barbarian force of Burgundians, Alans, Vandals and Suevi swept through central Gaul, cutting the links between Rome and Britain. In the autumn of that year (406), the remaining Roman forces in Britain mutinied. Two emperors were proclaimed in succession, the first, Marcus, being immediately assassinated and the second, Gratian lasting just four months. Zosimus (VI, 2-5) describes events thus:

'While Arcadius was still Emperor, and Honorius and Theodosius were consuls for the seventh and second times respectively (AD 407), the soldiers in Britain rebelled, elevated Marcus to the imperial throne, and gave him their obedience as ruler there. However, because he was not in tune with their ways, they put him to death, promoted Gratian and, granting him the purple robe and crown, formed a bodyguard for him as they would an emperor. However, not finding him to their liking either, they deposed him and put him to death after four months, and gave the throne to Constantine.'

This further emperor, Constantine III, took the last remaining legion, the Second Augusta, into Gaul to further his ambitions. According to Orosius, writing in the 5th century, 'Constantine was elected from the lowest ranks of the military, solely on the basis of the hope engendered by his name, and not because of any valour he had. As soon as he assumed power he crossed to Gaul. There he was frequently tricked by worthless pacts with the barbarians and was the cause of great harm to the state' (Adversum Paganos [Against the Pagans] VII, 40, 4). Zosimus provides an extensive history, mentioning a native Briton, Gerontius, as one of his generals. Orosius (VII, 42, 1-4) goes on to write:

'In the 1165th year after the foundation of Rome (AD 410) the Emperor Honorius, seeing that no action could be taken against the barbarians with so many usurpers rising up against him, ordered that the usurpers themselves be disposed of as a first move. The supreme command in this war was entrusted to the Count Constantius ... Therefore count Constantius set out to Gaul with an army, besieged the Emperor Constantine at Arles ( the new capital of the Prefecture of the Gauls), took him prisoner, and put him to death (AD 411). At this point... Constantine's son Constans was killed at Vienne by his Count Gerontius, a man more given to evil than to virtue, who then set up a certain Maximus in Constans' place. Gerontius himself was slain by his own soldiers.'

Britannia - The Failed State: Tribal Conflict and the End of Roman Britain

by Stuart Laycock It shows how tribal conflict was central to the arrival of Roman power in Britain and how tribal identities persisted through the Roman period and were a factor in the three great convulsions that struck Britain during the Roman centuries. It explores how tribal conflicts may have played a major role in the end of Roman Britain, creating a failed state scenario akin in some ways to those seen recently in Bosnia and Iraq, and brought about the arrival of the Anglo-Saxons. Finally, it considers how British tribal territories and British tribal conflicts can be understood as the direct predecessors of the Anglo-Saxon kingdoms and Anglo-Saxon conflicts that form the basis of early English history. Available from: