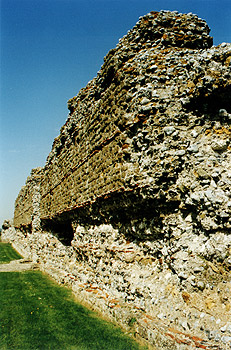 In 383 the British garrison proclaimed the Spaniard Magnus Maximus, known in Welsh legend as Macsen Wledig, as Emperor in Britain. He took his army to the continent to advance his claim and conquered Gaul, Spain and Italy. He occupied Rome itself in 388 only to be defeated in battle by Theodosius, the eastern Augustus. Maximus was beheaded in July of that year. Legend has it that many of his surviving troops settled in Armorica (Brittany). The consequence to Britain was the loss of much of its defensive force. Gildas, writing in the 6th century, provides a garbled version which wrongly dated the building of Hadrians Wall to the end of the Roman period:

'Thereafter Britain was robbed of all her armed forces, her military supplies, her rulers, cruel as they were, her sturdy youth. They followed in the steps of the usurper mentioned above (Maximus), and never afterwards returned. Totally ignorant of all the usages of war, Britain remained for many years groaning in a state of shock, exposed for the first time to two foreign tribes of extreme cruelty, the Scots from the north-west, the Picts from the north. As a result of their attacks and terrible depredations Britain sent envoys to Rome with letters, making tearful appeals for an armed force to give protection, and promising unwavering and wholehearted submission to Roman rule, if only the enemy could be kept at a greater distance. Forgetting previous ills, Rome soon prepared a legion, soundly equipped with arms. Crossing over Ocean to Britain in ships it engaged the fierce enemy, and killing a great number drove them all from the place, freeing from imminent slavery a people that had been subjected to such dreadful mangling. The Britons were instructed to build a wall across the island from sea to sea so that when manned it might be a deterrent to keep away the enemy and a means of protection for the people. The wall, however, being built not of stone but of turf, proved useless to the unthinking and leaderless masses.' ( Gildas, De Excidio Britanniae, 14-15).

In 396, general Stilicho - regent of the western empire during the minority of the Augustus Honorius - reorganized Britains remaining defences. This involved the transfer of military authority from the Roman army to local British rulers. In the following year he came to Britain to repel another attack by an alliance of Picts, Irish and Saxons.

In 402 events in mainland Europe forced Stilicho to recall the Sixth Victrix, one of the two remaining British legions. They were needed for the defence of Italy against Alarics Visigoths. In "Gothic War" (416-18) Claudian describes the Sixth Victrix as "the legion set to guard the furthest Britons, the legion that curbs the savage Scot and scans the lifeless patterns tattooed on dying Picts". The Sixth Victrix did not return to Britain as Alaric's incursion was followed by a further, more serious penetration by Radagaisus in 405.

Stuart Laycock ('Britannia: a failed state?', Current Archaology June 2008) speculates on the possibility that British militias had been formed along tribal lines in the late 4th century. In fact, he argues that the notion of 'British' hardly existed at the time as the Romans had built their occupational structures on pre-invasion tribal lines. The tribal militias, he contends, formed the basis of a new power structure as Roman rule failed.

Pointing to the high level of hoarding of precious metals, particularly in non-coastal areas in the south of England, Laycock finds it difficult to believe that this had anything to do with Pictish or Anglo-Saxon raids. Rather, he considers that the combination of hoards, distinctive military belt and buckle ornaments and earthworks suggest 'hotspots' of tribal conflict among the Britons, including:

Laycock sees a Balkanisation of eastern Roman Britain with new kingdoms essentially based on pre-invasion tribal structures and their civitates, along the lines suggested by Gildas for the west. He states that:

'The Anglo-Saxon takeover can be interpreted as new players taking advantage of local weakness to seize control. Alternatively, the Anglo-Saxon intervention could be seen as an integral part of British tribal conflict. As with the hoards, it has long been a puzzle why some of the earliest Anglo-Saxon settlements should be so far inland, in the area around Dorchester-on-Thames. What if the area was a hotspot for the Catuvellauni to locate a band of Anglo-Saxon mercenaries?'

'... many Britons Britons surely remained and became 'Anglo-Saxon'. Some may even have become 'Anglo-Saxon' kings - the West Saxon leader Cerdic (a British name) is the classic likely example. Continuity from British civitas to early Anglo-Saxon kingdom is probable in Kent and possible elsewhere. Was early Wessex the continuation of an Atrebatic political entity? Was Essex ancient Trinovantia? East Anglia the land of the Iceni?'

Britannia - The Failed State: Tribal Conflict and the End of Roman Britain

by Stuart Laycock It shows how tribal conflict was central to the arrival of Roman power in Britain and how tribal identities persisted through the Roman period and were a factor in the three great convulsions that struck Britain during the Roman centuries. It explores how tribal conflicts may have played a major role in the end of Roman Britain, creating a failed state scenario akin in some ways to those seen recently in Bosnia and Iraq, and brought about the arrival of the Anglo-Saxons. Finally, it considers how British tribal territories and British tribal conflicts can be understood as the direct predecessors of the Anglo-Saxon kingdoms and Anglo-Saxon conflicts that form the basis of early English history. Available from: