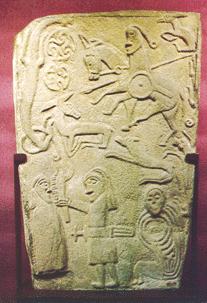 'Just over a thousand years ago Pictish society disappeared as a distinctive entity but they left behind, as silent witness to their existence, a remarkable series of sculpted stones that is without parallel in Europe. The prime purpose of these standing stones was to display symbolic messages about their society but these, once public, statements are now most secret.'

There are several hundred stones extant which bear these symbols. The stones themselves range from roughly-dressed to carefully shaped slabs and some free-standing crosses. However, Jackson argues that the symbols and designs were relatively uniform, to such a degree that the 'masons used a pattern-book: actual or mental'. He goes on to conclude that such stereotyping indicates that they held the same meanings throughout the Pictish world while the upright nature of the stones indicates public statement. 'The only question is why, and what do they mean?' 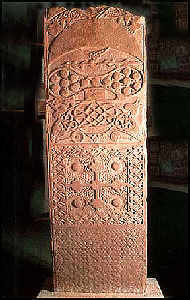 Jackson sets out to provide a detailed and densely-written answer which Foster (2004) feels 'stretches both credulity and comprehension'.

Since then, advances in our knowledge have come from rescue archaeology, field survey, aerial photography, 'historical, place-name and art-historical research, enhanced by interpretative analyses of this evidence from a variety of differing perspectives'. Foster argues that current opinion agrees with Leslie Alcock's description of the Picts as 'a typical north-west European barbarian society with wide connections and parallels' and that this was how they were viewed by their neighbours.

A dark age power centre at Rhynie in the September/October 2011 issue of British Archaeology describes excavations at a major Pictish site and discusses some of the implications such as:

"The Rhynie evidence also has implications for our understanding of trade networks and political relationships in sixth-seventh century Britain and further afield. The imported pottery is highly significant, for it has not been found in Anglo-Saxon or Pictish contexts to date, or east coast sites in Britain more generally, suggesting that Rhynie had political and trading links with the kingdoms of the west." 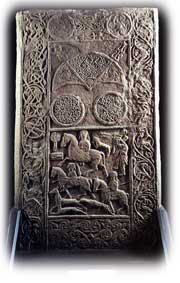