Birth Myths of the Nations of Britain 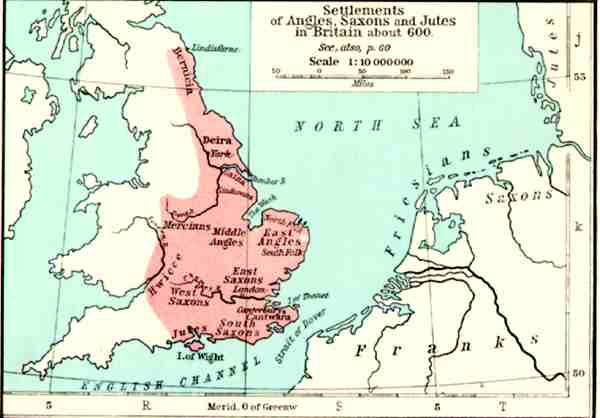 History is not impartial. Interpretations of early medieval Britain are linked to a number of distinct agendas: in particular, the foundation myths of England, Scotland and Wales. The strength of these agendas has coloured, and in many ways formed, most people's conception of what happened in this period. The main theme which concerned the 'traditional' (essentially Victorian) view of the dark ages in this island is that the Welsh, Scots and English were distinct nations, with a significant racial underpinning to the differences between them. For example, Bryan Ward-Perkins (English Historical Review, June 2000) observes that:

"Most of the English, if they know anything of early history, feel that their Englishness derives ultimately from a predominantly Anglo-Saxon ancestry, with perhaps a romantic tinge, but only a tinge, of later immigrant blood -- Viking, Norman, Huguenot, or whatever. The Britons (and the Romans) play little part in the perception that the English have of their ancestry. Consequently, they see themselves as markedly different from the other ancient inhabitants of the British Isles; and they would never describe themselves as `Celts', unless their recent ancestry included known Scottish, Irish, Welsh or Cornish ancestors."

Ward-Perkins (2000) cites Freeman, an influential Victorian Anglo-Saxonist who wrote in his Old English History for Children (1869):

"The [British] women of course would be made slaves, or they would sometimes be married to their masters. Thus there may doubtless be some little British and Roman blood in us, just as some few Welsh and Latin words crept into the English tongue from the very beginning. But we may be sure that we have not much of their blood in us, because we have so few of their words in our language ... Now you will perhaps say that our forefathers were cruel and wicked men ... And so doubtless it was ... But ... it has turned out much better in the end that our forefathers did, thus kill or drive out nearly all the people whom they found in the land ... [since otherwise] I cannot think that we should ever have been so great and free a people as we have been for many ages."

The main strands of the traditional interpretation adopt the following logic:

As we can see in Teutonic England, the essence of this interpretation is that England is fundamentally Anglo-Saxon rather than British or Celtic in racial and linguistic origin. Similarly, Scotland owes little to the Brythonic Celts, having been formed by a fusion of the Gaelic west and north (the mysterious Picts duly absorbed) and the Anglo-Saxons of Lothian in the south-east. Acceptance of this approach requires that the Romano-Britons, who numbered in millions, were simply overwhelmed by a few boatloads of invaders and fled to the west or died. Clearly, there is something wrong here!

Martin Henig (British Archaeology, December 2002) considers that 'the creation of this myth can be laid at the doors of Gildas (the Briton) and Bede (the Anglo-Saxon). Both were Christians and took their lead from the Old Testament. For Gildas, God chastised his people, the Britons, for sexual backsliding. For Bede, the English were the new Israelites coming into the promised land.'

Ken Dark (Britain and the End of the Roman Empire, 2000) uses archaeological evidence to demonstrate a different pattern of cultural division and evolution. He concludes that the Britons were alive and well inside 'Anglo-Saxon' territory for several hundred years at least.

Similarly, Martin Henig casts doubt on the interpretation of 'dark age' evidence such as the assumptions that Anglo-Saxons were buried with grave goods and Britons were not (British Archaeology, December 2002). "It is not satisfactory to describe, for example, the warrior buried at Lowbury Hill in Oxfordshire as an Anglo-Saxon - as many have - simply because he possessed a shield and a spear. His iron spear was enamelled, most unusually, in a Celtic style, and he was buried with a hanging bowl also in Celtic style. It looks rather as if he wanted to make it clear that he was British."

An article by Martin Evison looks at this from a genetic and linguistic perspective:  Lo, the conquering hero comes (or not)

See also a recent article by Tim Gay which point to the survival of Celtic (Brythonic) words in England and Scotland into the 20th century:   Rural dialects and surviving Britons